24 Hours In And Around La Malbaie

We planned a road-trip to Canada, as it was only a 10 hour drive up to Montreal from Baltimore, Maryland. The itinerary was Montreal, on to Quebec City, and then make our way back through New England. We asked a friend, who was born and raised in Montreal, for recommendations. He was not only gracious enough to give them, but also invited us to spend a couple of days at his home in La Malbaie. We mentioned the three kids in tow, and he replied by telling us we would all fit comfortably in the cottage on the property next to the main house.

La Malbaie, Canada is a town in the countryside of Charlevoix. It literally means “bad bay.”  Charlevoix is a gorgeous provincial strip nestled between the Laurentian mountains and the St. Lawrence River. At that point east, the St. Lawrence  is ten miles wide at the point where the town sits; the Laurentian mountains rise up behind it. A road wraps around mountains overlooking the river, on both sides of La Malbaie. It’s a little over a two hour drive from Quebec City.

Where to Stop on the Drive to La Malbaie from Quebec

Our first stop on our way to  Charlevoix was to the Chutes Sainte-Anne to visit the falls. The entire circuit took 45 minutes consisting of pathways, stairs, and bridges above the falls. There were many areas to stop and snap a photo of the falls. The sounds of the gushing, falling waters drowned out most of all the other noise and gave us a sense of calm and relaxation.  We strolled slowly taking in the scenery, making the most of our time. The kids enjoyed the hike and viewing the different levels of the falls. Seeing that the next one was bigger and more impressive than the previous fall. 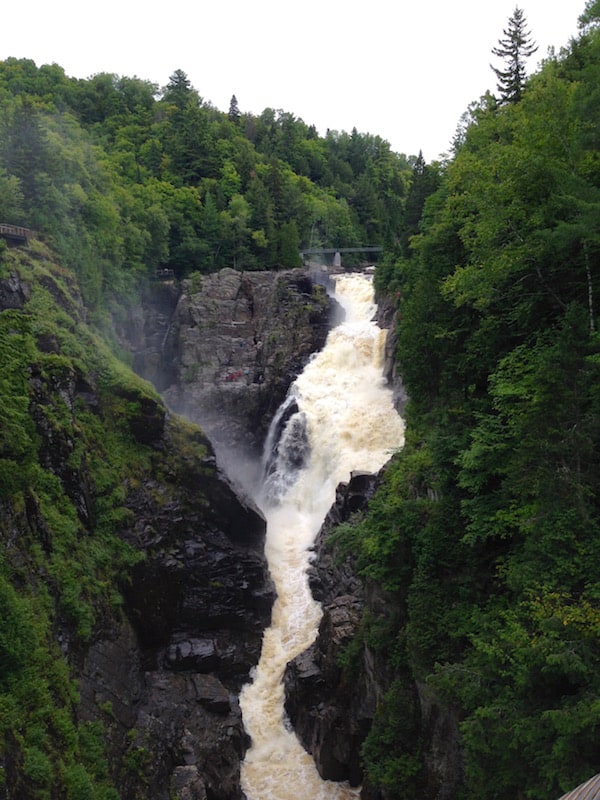 As we continued the path, we came across a suspension bridge across a fall and a 50 foot gorge. Before crossing the bridge, right to the right of the bridge was a zip line crossing the gorge. There was a young man outfitting people who dared to zip across. However, in order to be outfitted, one must climb down onto a rock jutting out over the gorge, with a dropoff that would for sure do some serious harm if you made one false move.  Our kids, ages 8 and 9 at the time, insisted that they get their adrenaline junkie fix on by zipping across the gorge. The gorge is 50 foot drop. Why not; most parents would say yes to this!

Along our drive we stopped in Saint-Joseph-de-la-Rive for lunch and a visit to the Maritime Museum. The kids were able to explore schooners and tug boats and learn about the rich maritime history of the area.  There is a sawmill as well with interactive kids activities to keep the young ones fully engaged. Right next to the museum was the Saint Lawrence River shoreline and it was low tide so the kids wanted to explore. I didn’t realize how soft the sand would be, almost the consistency of mud. So one child lost his shoe as his leg started disappearing in the sand. The other two were laughing, he was crying and my husband was not too pleased. Luckily, he had another pair of shoes, and they got to explore the shoreline of the Saint Lawrence River.

By this time, it was late in the afternoon and we headed over to our friends home. They own a beautiful old house with a pool and a rustic guest house. The land has apple and pear trees and as we pulled in, we were welcomed our friends, their three daughters, daughters friends, and the mother of the woman that owned the home. It was a full house. Our kids jumped out of the car and headed straight for the pool. We brought the luggage to the guest house, dropped it off and enjoyed a tour of the house and property.

We opened a bottle of wine and started preparations for dinner. There were fresh veggies and fruits displayed on the table, hand made sauces, beautiful flower arrangements. It was a page out of Martha Stewart.  The table was long and with rustic with beautiful centerpieces, set on an outdoor patio overlooking rolling hills down to the St. Lawrence River. Did I mention that the entire family spoke perfect French, even though they all grew up in the States (with the exception of the father)? It was a beautiful evening as we dined outside listening to the bugs and watching night take over what was left of a great day.

The next morning we were up early for a whale watching experience with Croisieres AML. They offer a zodiac boat or a boat cruise. We all wanted to do the zodiac, but there are age restrictions and our youngest was too young. He and my husband took the boat cruise. I went with the other two on the zodiac.

The advantage to the zodiac boats is smaller group sizes and faster to getting to the whales. You do have to wear a safety outfit and I strongly recommend glasses. They provide a captain and naturalist. We saw a bunch of humpback and some minke whales and the guide was quick to point out what to look out for and what we were looking at. Kids also loved the speed of the zodiac and the vistas of the shore line were amazing. The entire whale watching excursion was three and half hours. 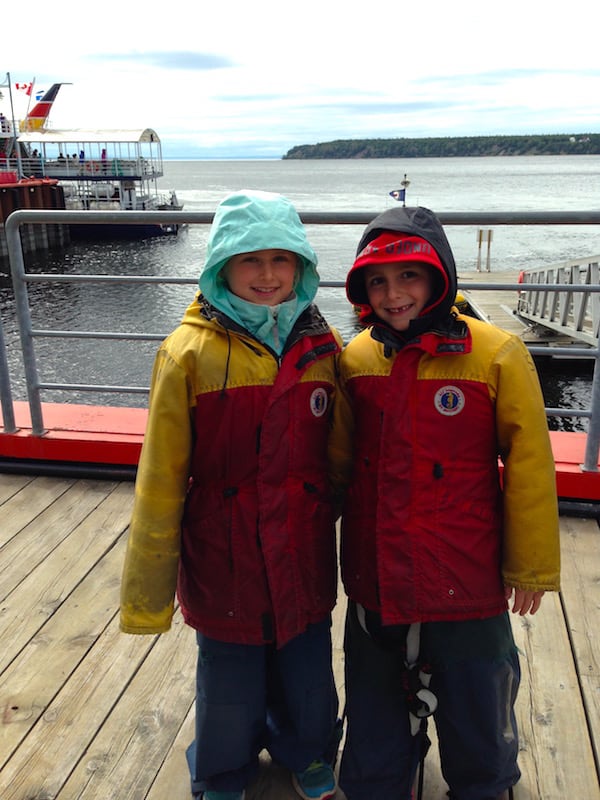 We drove about another 30 minutes from the whale watch port to  Saguenay-St. Lawrence Marine Park.  We took a nice relaxing hike at The Pointe-Noire Interpretation and Observation Centre and spent an hour or so looking out at the Saint Laurence while relaxing and enjoying the views.

After we drove to check out the Fairmont hotel in La Malbaie, ridiculously beautiful  Chateau-styled hotel overlooking the Saint Lawrence River.

We parked and walked in to check it out. Our stop was the shop for Vergers Pedneault, which makes some of the best artisanal cider in Quebec. We stocked up on apple jams, cider vinegar, and elegant (grownup) ciders, including an amazing dessert cider. The Fairmont, which is one of the former Canadian National railroad palaces, boasts a golf course, tennis courts, pools and a spa, not to mention amazing restaurants. I wanted to check-in, but we already had a place to stay at a better price–free! At this point we drove back to our friends house to rest, let the kids play for a bit and help out for another amazing dinner out on the deck. We enjoyed a beautiful meal, drank wonderful wine and watched the night take over the Saint Lawrence River. It was a wonderful way to end our stay in Charlevoix.

Getting in our car to head back to the US, we took our hosts’ recommendation and stocked up on terrific pastries and great coffee at Pains d’Exclamation for the way home. Of course, until we stop at every Tim Horton’s en route, like moths to a flame.

Pin This For Later 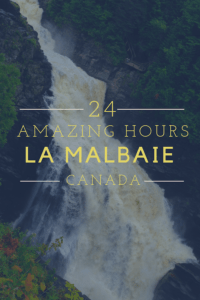