Exploring A Floating Village in Cambodia

When we travel as a family, we like to connect with the local culture to understand where we are and what makes- up the country and people. We connect through, food, exploration of a countryside or a city, markets and touring. With three full days in Siem Reap, Cambodia, our goal was to learn as much as possible.

We hired a guide, Thy Angkor Tour, learn more here, for our days in Cambodia, recommended by a friend. Thy, our guide was a treasure. By Western standards, the cost of a guide is quite reasonable in Cambodia per day and included an air-conditioned van. Thy was eager to tailor our experience. We explained that while we wanted to explore the splendor of Angkor Wat (and we did), we also wanted to get off the beaten path a bit. He set up an itinerary that had us going to a floating village on the Tonle Sap Lake.

Thy arranged for us to see Mea Chhrey Floating village which, translated in English, means “The Mobile Floating Village.” Mea Chhrey is distinct from the typical four floating villages that foreigners most commonly visit. Some villages have become so overrun by tourists, that it’s become hard to get a real picture of what makes this life so unique. The day we visited, we were the only tourists in and around the village.

Thy drove about 50km outside of Siem Reap to a river bank that would lead us into the Tonle Sap Lake. As he negotiated with the driver of the boat, the kids ran around the dirt road, chasing after chickens and ducks who seemed to live wild in the area. 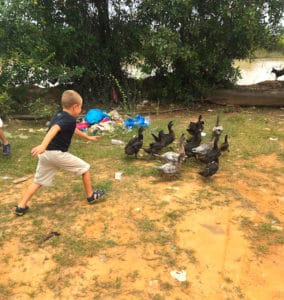 I noticed immediately, the amount of trash strewn all over the road, riverbanks, and throughout the bushes. Seeing this, I quickly recognized the lack of infrastructure and sanitation. We were heading to a village steeped in tradition yet one that is plagued in poverty. 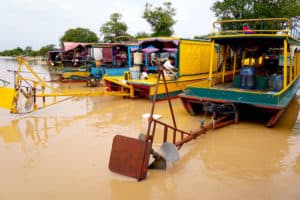 We climbed into a wooden boat, powered by a tractor engine, and sat on the wooden bench seats. Our boat headed up-river to the Tonle Sap Lake. Floating homes of wood and tin appeared as the lake widened. We watched people working on their homes and women selling goods and produce directly from their boats. They would stop for a chat and a drink while conducting their business. Men and women alike pulling in fishing nets from their boats, most likely from the night before. Our children watched as Cambodian kids younger than they, piled on a boat and started rowing to school on their own. 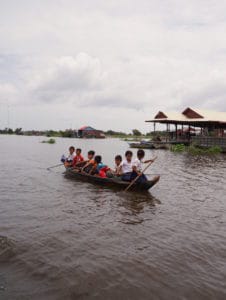 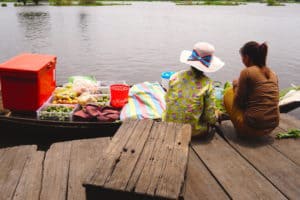 Understanding Life On The Water

Our guide explained that for years the lake has been their source of income. People live off of what the lake provides, fish, frogs and eels. However, due to over-fishing, the government has cracked down and now many villagers either fish illegally or now raise crocodiles as a source of supplemental income. 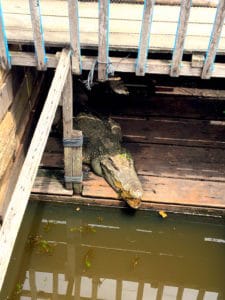 He explained that most of the electricity at the homes runs off battery power and there isn’t proper sanitation. The water used for drinking and bathing is the same water where trash, human and animal waste goes. It was a sobering reality check into this style of life.

Our boat stopped at one of the floating stores. We hopped out bought remarkably cold sodas and had a closer look into how the villagers lived. We were shown the inside of one of the homes, very basic in furnishing with an old television running off battery power. Underneath the frame of the house, which is on stilts, were crocodile pens, and a cage of fowl floating on empty gas barrels. A woman floated up on her wooden canoe filled with vegetables for sale. It was good for our kids to see that not everyone gets in the car to go to the large market with mass-produced goods, and how some people rely on producing and selling their products. 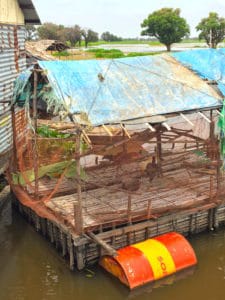 We wanted our family to learn about this way of life and letting our kids see how people build communities around what supports them. In this case, it’s fishing. We hoped that they understood that this way of life is not easy and quickly disappearing. 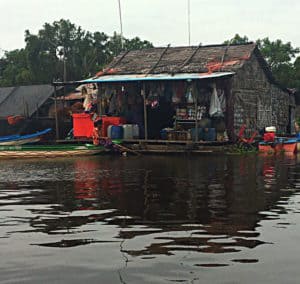 If you chose to go visit a floating village in Cambodia, make sure to do your homework and that the proceeds of your visit are going to help sustain the village rather than the travel provider. Fishing created these villages. Unfortunately, they may now be losing their livelihood due to increased consumption and over-fishing. Travel has given our kids first-hand insight into the complexities of evolving economies. 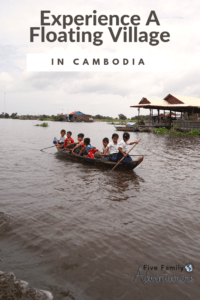 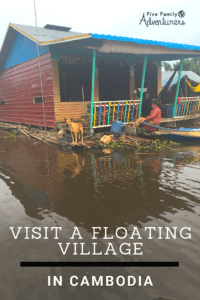