Get Lost in Toledo, Spain; A Day Guide

Toledo Spain is an easy day trip destination from Madrid’s Atocha train station. Trains run hourly both to Toledo and back to Madrid. You can find the schedule here. The train ride is short to Toledo and upon arrival into Toledo train station, you have several options to get into town. You can walk (approximately 20 minutes), take a shuttle service, or grab a cab. Given the relatively low cost of the cab and our desire to maximize time, we loaded the kids into a taxi. Toledo is a walkable city, but entails a good amount of walking, so be realistic on what your kids can do based on their age. It’s also quite hilly.

The town of Toledo is a kid’s dream come true with its unforgiving labyrinthine of ancient streets enclosed by massive stone walls. It is also very easy to get lost in. Even with the advent of GPS and good old-fashioned maps, you will still most likely get lost. If you are going during peak tourist times, like we did, be prepared to fight off the crowds. Like us, many come for a day trip. 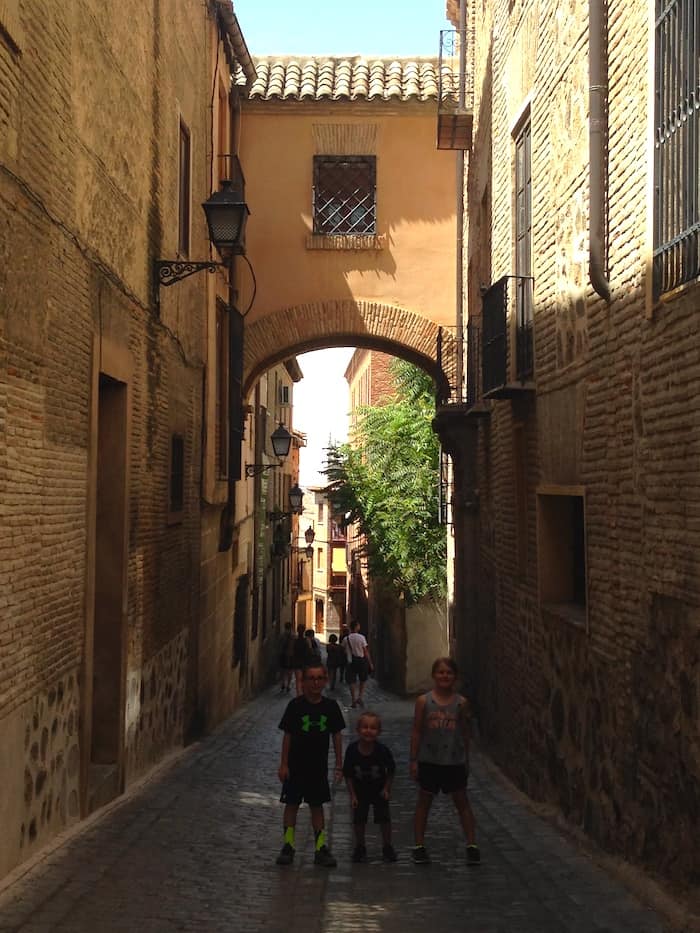 When we arrived, we stopped for a quick snack and coffee. We had planned to see the Cathedral and the old Jewish Quarter with its remaining synagogues, but hadn’t planned much else. I didn’t think we would have time for the Alcazar, nor did I think the kids would be interested in the military history.

We set off, map in hand, headed directly towards the main cathedral. Within seconds we were lost, headed down twisting streets, narrow alleys, trying desperately to follow street signs to the Cathedral. After a bit of arguing, we agreed that the best thing to do would be to let the kids lead the way to the Cathedral. Sort of make a game out of the maze of the city. After 20 minutes of winding streets, we eventually found out way to the massive Toledo Catedral.

” Holy Toledo,” was what we heard as our kids walked into this awe inspiring Cathedral. It had been years since our kids had seen such a majestic sight. From the outside it didn’t look as massive as it did when they stepped into the interior. They were mesmerized by the gold relics, the stained glass and the treasury with all of its gems and gold and silver. It was fun watching their expressions with all of the details the cathedral provides. All signs point to this magnificent Gothic style Cathedral set in the heart of the city. It took 200 years to construct and was completed in the 15th century. It was a great introduction to the famous artist El Greco, as he was commissioned to paint many altarpieces as well as artwork throughout.

As we left the Cathedral, our kids eyed the Toledo Torture Museum. They begged to go in, we bought tickets and let the kids excitedly run in. Once in, it dawned on us, the parents, just how revolting this was. The Spaniards had a way of masking the truth of whom the devices were used on by calling the victims “heretics.” They were not “heretics,” they were the Jews of Spain. They tortured and killed them during the Inquisition. The museum had all types of devices including an iron maiden, it was grotesque, and yet sadly a part of history. We shielded the information from the kids, as they are young and will learn at an appropriate age, and quietly moved on.

After a brief lunch to let the previous experience pass by, we walked some more through the narrow streets and came upon Monasterio de San Juan de los Reyes. According to our kids, this was a disappointment compared to the Cathedral. That’s all I have to say. Another wonderful example of Gothic style, this church was built with the intention of being used as a royal mausoleum. Take a look at the ceiling, with its strong Moorish influence on the style.

We worked our way to what felt like the bottom of the hill and the end of the labyrinth to the old Jewish Quarter to visit two Synagogues, Santa Maria la Blanca and El Transito Synagogue.

Santa Maria la Blanca This is the oldest synagogue in Toledo in what was once the Jewish quarter. The synagogue is one of 12 synagogues that remain in Toledo. Wonderful history of a once thriving Jewish community in Toledo. While we were there, there was excavation going on to take down the stucco that covered the once ornate walls that filled the synagogue. 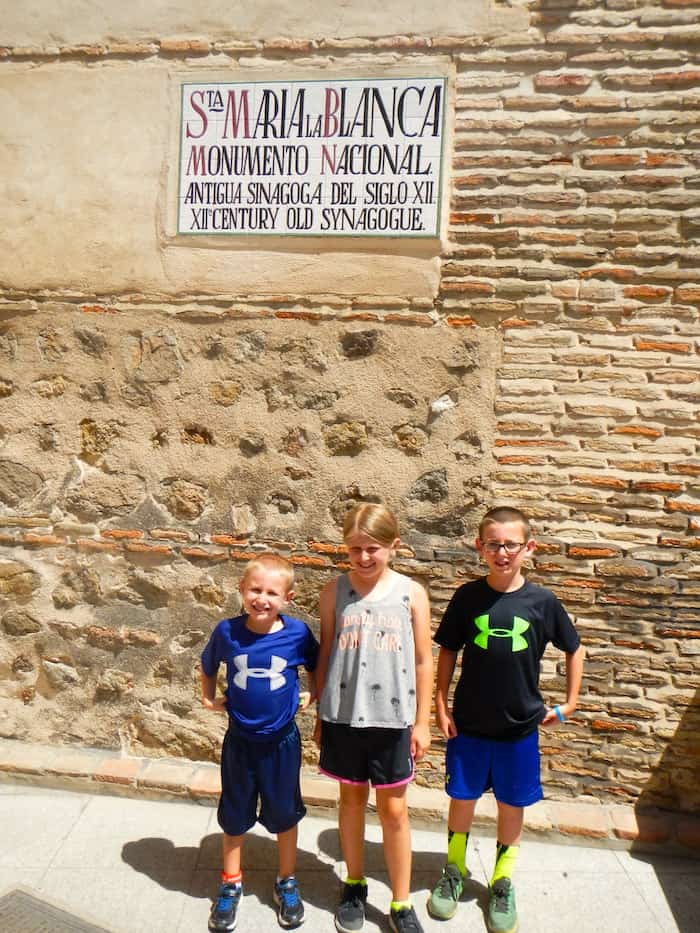 El Transito Synagogue is now a museum, opened in the in a once prominent Sephardic Jewish Synagogue built in the 14th century in Toledo. The Museum details the arrival of the Jews to the Iberian Peninsula, their culture and importance to the area and eventually their expulsion, persecution and conversion during the Inquisition. We let the kids run around the courtyard for a bit before making our way out. We also visited the Jewish quarter in Sevilla, which like Toledo, once had a very prolific Jewish population before the inquisition.

After our visit we followed the signs back to the Cathedral, as it is the center of town, oriented ourselves and headed towards the outskirts. Before leaving, we stopped for some marzipan. Toledo is famous for their marzipan, a thick dessert consisting of sugar, honey and almond meal. Not particularly my favorite. You will see it sold all over the town. We also got some churros con chocolate, another famous Spanish desert. Deep fried tubular dough, sprinkled with cinnamon and sugar served warm with hot thick chocolate drink. You dip the churro into the chocolate for a perfect combination of doughy chocolate melt in your mouth taste.

We headed back to the train station; I recommend buying round trip, as the Toledo train station can get busy late in the afternoon with day-trippers. We were back in Madrid in time for a nice stroll around Retiro Park followed by what we consider a late dinner at 8:30 PM, but to the Madrileños, super early. 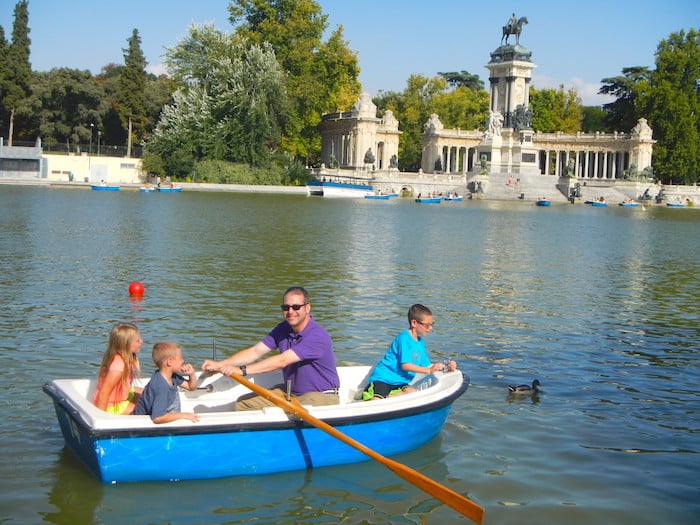 Pin It For Later: 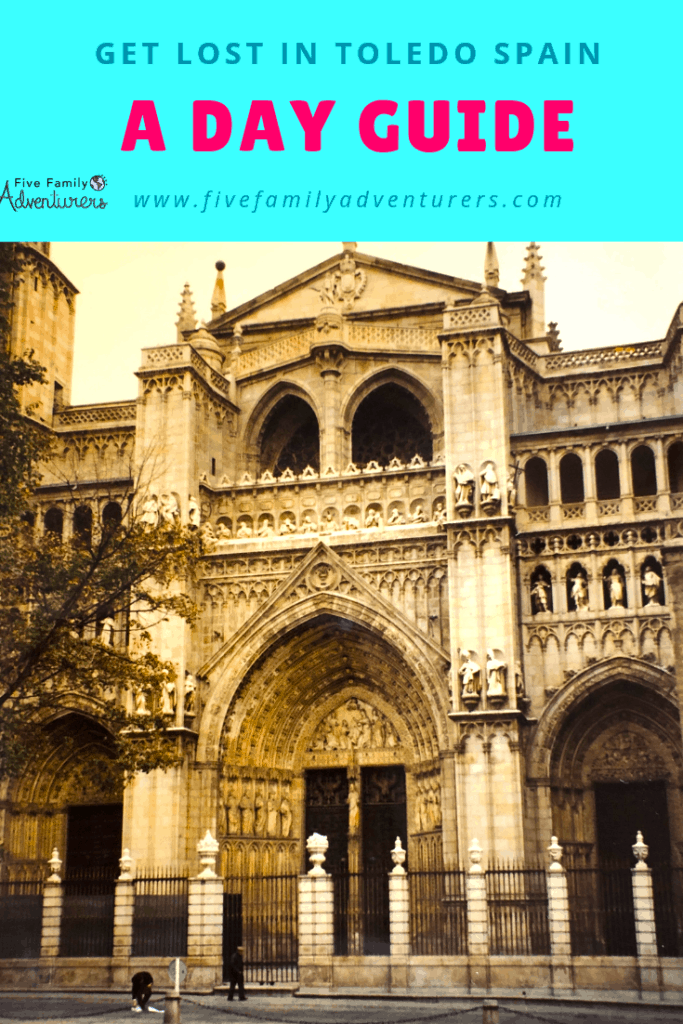 Remembering The Birth Of My Wanderlust
Next Post: Seven Ways To Stay Fit When Traveling With Kids