Remembering The Birth Of My Wanderlust

I grew up traveling as a kid with my parents and sister. We went on road trips, a trip to Disney, and our annual summer beach week; we were always traveling. I brought that love of travel with me growing up into young adulthood and now into my own family. Fortunately, my partner, the man I married and started a family with, has his own travel bug as well. We were meant to be together.

Was there a particular moment, a specific location, a certain meal that made travel an essential part of my life?  Helping my kids’ middle school for their annual “learning festival, ” this year focused on China, the moment my love for travel crystalized came to me. The travel bug bit me when I was 14 years old.  It was on my high school trip to China in 1986.

I started pulling out all of my old printed pictures as well as my trinkets that I bought while in China so I could begin to prepare my presentation to middle schoolers. I sat, looked through all the old photos and realized how different traveling was thirty years ago, especially the China of the mid-Eighties. It was a big deal for a high-school group from Delaware to go to China in 1986. Such a big deal, that we made the cover of the Delaware News Journal. That’s me, front and center in the picture. Bad hair, braces and just looking completely awkward in my early teen years.

We had to have introductory letters from the Lt Governor of Delaware sent to the five cities we would be touring in China before we went. We took an entire course on China and had to write a research paper upon returning to receive credit. Who knew I would later be blogging about travel?

We boarded the plane from Newark NJ, after a night spent in a rat- and roach-infested motel, tired, but ready to go. We were armed with our latest devices to fill the void of a twenty-hour flight–books and our Walkmans that played cassette tapes. I had the flu and just wanted to sleep. I was seated next to an older man from China who wanted to practice his English for what seemed like the majority of the flight. I kept kindly trying to explain that I was sick and needed to sleep. He would nod, smile and continue talking. I finally just shut my eyes for the duration.

When we arrived in China, we were tired and customs were not easy.  Government standards were strict with visitors, which meant we had to go through a lot of government hoops to finally get out to our awaiting bus. We were taken to our hotel and our guide explained to us how we had to boil our water before drinking it. We couldn’t even brush our teeth with unboiled water. They put the fear of God in us about the water, as if we would die instantly if un-boiled water touched our mouths. It was evening when we arrived; we were tired and just wanted to sleep. My sister was with me, so we shared a hotel room. We had a TV, but soon found out that not only were the few channels only in Chinese, but they went dark at a specific time at night.

We woke in the morning and looked out the window for our first glance of Beijing. The streets were desolate of cars. Unlike modern day China, the skyline wasn’t filled with skyscrapers. People wore drab-colored clothing. Everyone biked to work and few buses lined the streets. Those that did have cars were mostly government employees.

Our morning started, as many of our mornings, with what we referred to as dishwasher water soup, soup that lacked any taste and we couldn’t make out any of the chunks of mystery meat floating in the broth. There were some other meat dishes served, but most of us just consumed the rice and fruit. The fruit that was watered with the same water we weren’t supposed to drink.

We soon found out that we wouldn’t be able to get water to drink anywhere, as bottled water just wasn’t sold in China. Actually, bottled water wasn’t really a thing then. If we were thirsty, we had to buy a highly sweetened orange soda. It tasted like the kind of drink you have on a fasting glucose test. If you were lucky you found a Coca Cola. Most of us walked around all day with headaches from too much sugar.

We were given tourist money to use only in select places. Street vendors only wanted dollars, though. However, the money we exchanged was a special tourist currency we could only use when in government-approved places.

We were introduced to squat toilets without toilet paper, and realized that this would be the topic of discussion on many of our bus rides.  We would compare squat toilet locations and their cleanliness. It was as if we hit the jackpot if we found an actual toilet seat.

Every time we stopped and got out of the bus in a square like Tiananmen Square, a park or historic site, we would be surrounded by people 10 people deep wanting to practice their English, or wanting their kids to see who we were. We were treated like stars. Before we left,  we bought little American Flags on toothpicks so we could hand them out to the kids. Seems silly now, but then it was a big thing and highly encouraged. 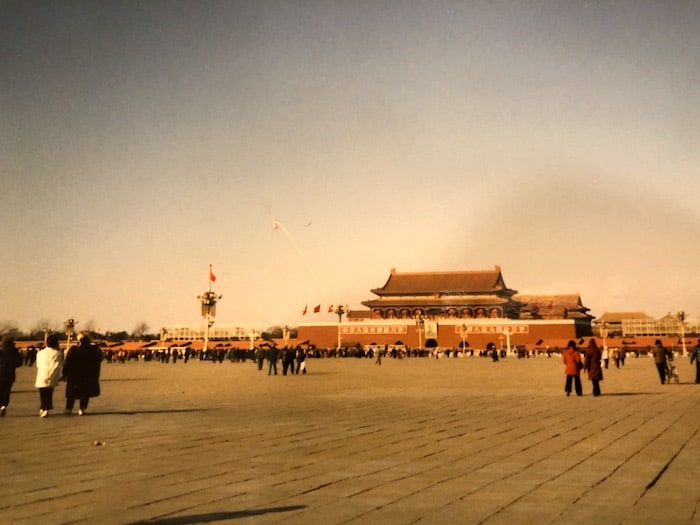 Spitting was also another cultural norm we weren’t used to. Many large cauldrons dotted streets, historic sites, and parks all over China, where mostly men spit into. Some just spit onto the street. We dodged the spit on the street as if we were playing  the videogame Frogger (some of you may be too young to know what Frogger is).

There were also billboards and posters plastered everywhere promoting the one child per family policy that was put into place only seven years prior. China’s population had hit one billion by this point.

Our first tour was the Forbidden City. There weren’t many visitors there, and those that were there were mostly locals. I had never seen something so large or–to me–exotic. The architecture, the detail, the scale completely overwhelmed me. I wanted to stay the entire day and take in every part. 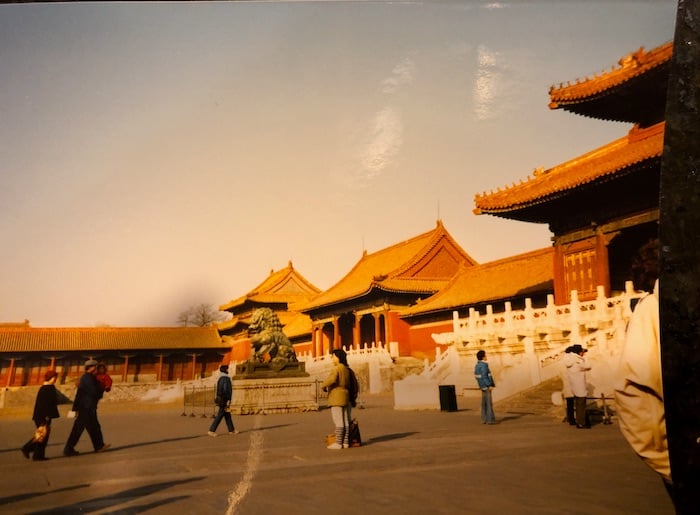 We went to the Great Wall, and didn’t have to fight off hoards of visitors, because there just weren’t many. We saw the Terra Cotta Warriors in the place they were originally found 12 years prior. We stood and watched the excavation take place, in the cold, as the warehouse didn’t have heat. We visited many religious sites, ornate summer palaces, and stunning gardens. We traveled first class by train from Suzhou to Hangzhou–or was it the other way around? I can’t remember. 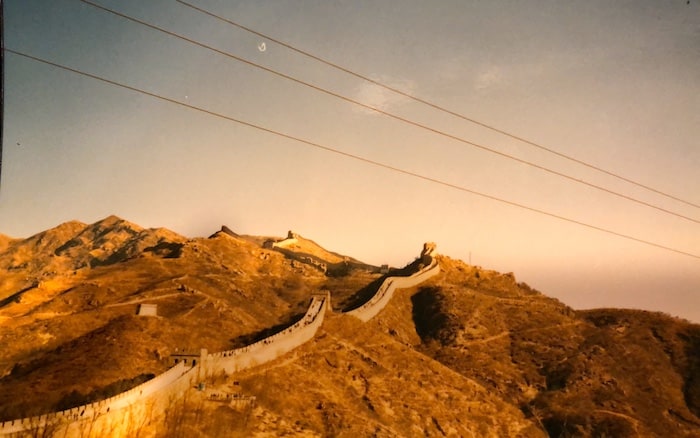 We visited government-run factories during our two weeks. A silk factory, where women sat and picked apart silk-worm eggs. I can still remember the stench. We saw a wooden fan-making factory, all done by hand; a carpet factory, and a factory where people painted scrolls. We went to a school to see how children learned. It was very regimented and kids stood and repeated, in a militaristic fashion after the teacher, their lesson. I remember it didn’t have heat and the kids were bundled up. We also visited a farmhouse, but I think government officials carefully chose it as it was nicely decorated with state-of-the-art appliances. 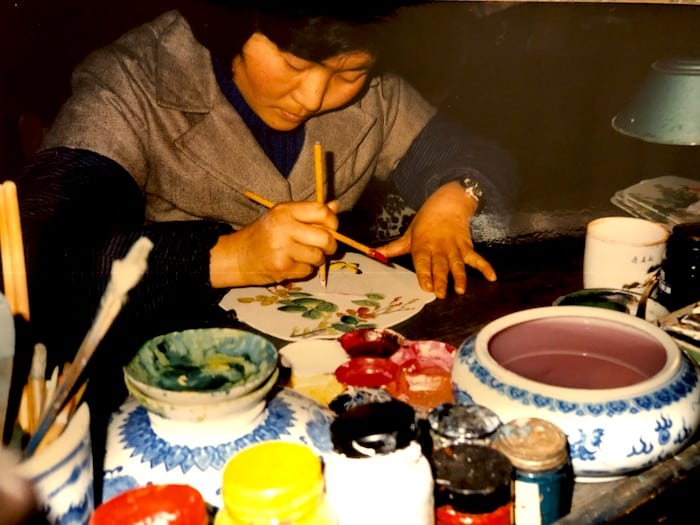 We went to a university where students were learning English and spent time talking to them. I created a penpal relationship with the student I spoke with and for years we wrote (on paper) back and forth to each other.

Shanghai lacked the massive high-rises of today, and just had some large government buildings and factories. Google the images 1986 Shanghai and 2019 Shanghai–you will see. There were still open sewers on the streets and many parents just let their kids do their business while walking down sidewalks.

Our meals were large and long. Many consisted of unrecognizable foods.  The one constant at our meals that we could always depend on was the rice, sweet oranges, and the green tea served in beautifully, decorated porcelain mugs with just-as-ornate lids. No sugar, though, to sweeten the tea.

We were treated to traditional Peking Duck while we stayed in Beijing. However, most of us just remember it being served whole with the bill and feet still attached. Not how well it was prepared and presented or that we ate it with a sweet sauce while wrapping it in a doughy pancake.

As teenagers, we did a lot of food complaining instead of embracing the unknown and appreciating what we were given. It wasn’t the same American-styled Chinese food we got at home but, then again, we didn’t go all the way to China to get what we could get at home.

Our trip, although so long ago, is still fresh in my head. So many details I remember and so many I sadly have forgotten. It was this trip that gave me wanderlust. This was the trip that made me realize that I needed to discover the world, learn new cultures, see historic sites, climb ancient temples and try new foods. I came home wanting more, needing more. For some on the trip it didn’t have the impact. They were happy to be back in their own beds, eating their own comfort food, and just back to routine. Not me. It had lit a flame that has never gone out and just keeps getting bigger. A flame I can hopefully pass down to my kids so they too will wanderlust. 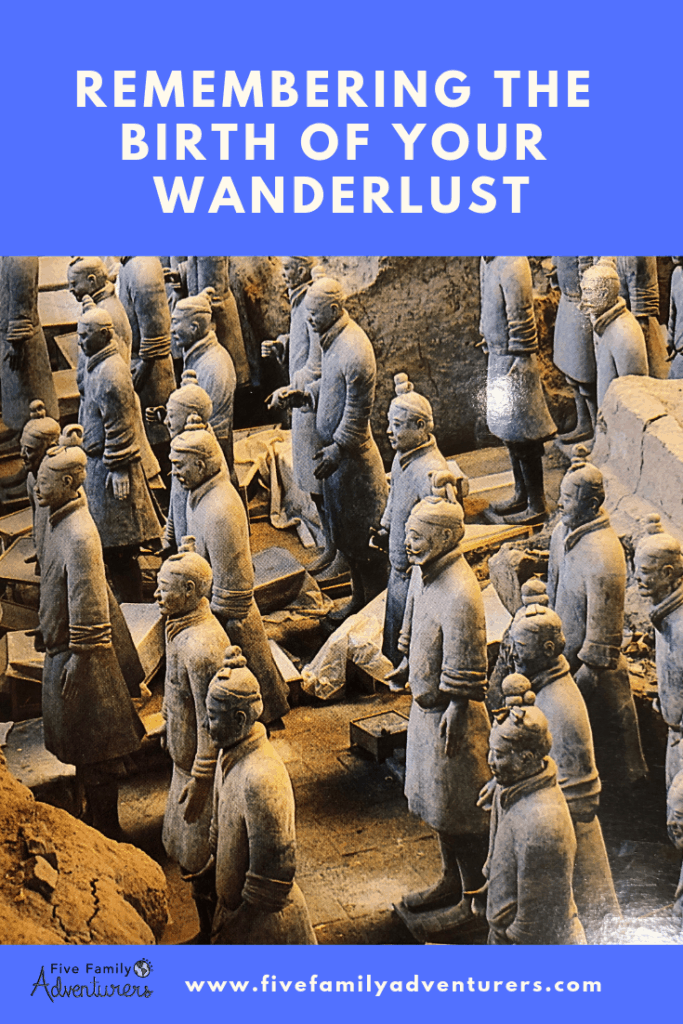 A Family Guide to Choeng Mon Beach, Koh Samui Thailand
Next Post: Get Lost in Toledo, Spain; A Day Guide