Why We Love Sevilla (And You Should Too!)

This post contains affiliate links, meaning no additional cost to you. I will earn commission if you click through and make a purchase.

I have been to Sevilla a number of times in my life; while I was a student, as a solo-traveler, with my job, with my now husband before we were married, and recently with my kids. I fell in love with the city and its cobblestone, narrow, and–sometimes–mysterious streets. What I really fell for, besides the historic buildings, heavily influenced with Moorish architecture, was the gazpacho. I couldn’t get enough of it. The cold tomato-based soup, made with the perfect amount of sweet and acidity. Made with the rich Andalusian floral-tasting olive oil, sherry vinegar, garlic and bread. Served with an accoutrement of chopped vegetables to scoop into the soup for texture and crunch.

As a family who loves to travel, this was my secret excuse to get back to Sevilla. We decided Spain would be a wonderful family travel destination. The question was: do we go north or south? For me, this was an easy answer: South towards Sevilla. I was on a mission to get back to eat all the gazpacho I could in the couple of days we had in the city.

Of course, there is more to Sevilla than the gazpacho. Clear blue skies with the sun beaming down or the swallows that surround the Cathedral at dusk.  The care-free attitude of the Sevillanos strolling in and out of the cafes to take their morning cafe or their evening drink.  It is a great city for kids with its winding pedestrian streets, fabulous weather and large looming cathedral. Like Sevilla, there are a great number of wonderful European cities  that are just as quaint, historic, and filled with a great array of things to do and see. With its many cafes and parks, your kids will convince you to take one of the horse drawn carriage rides available throughout the city. 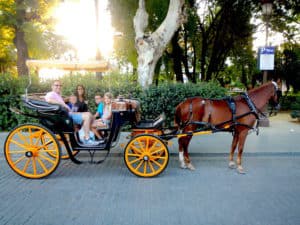 “Wow, that’s Christopher Columbus in there.” Our kids were overwhelmed with excitement seeing his tomb inside the Cathedral. They also loved the size, the fact that their voices echoed and how high the ceilings were. The third largest Cathedral in the world, The Seville Cathedral has an impressive gothic style and well as an impressive size. For those kids that have studied Christopher Columbus, they will be excited to see his ornate tomb housed inside the Cathedral.  Although some would argue he’s buried in Dominican Republic. Monday: from 11:00 AM to 3:30 AM Tuesday to Saturday: from 11:00AM to 5:00PM Sundays: from 2:30PM 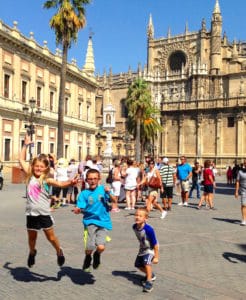 Our kids made a race of running to the top. Half way up, they slowed down as the winding, steep stairs got the better of them. However, the view we experienced from the top was well worth the trek. The bell tower of the the Seville Cathedral. The Giralda is attached to the Cathedral with the entrance leading to a spiral staircase. Not for the faint of heart, but the kids will try, for sure, to run up all the stairs. Once at the top, you will get a beautiful view of the city of Sevilla.

As our daughter said upon arriving to the chapel, “Why does every painting have death in it or represent death?” Thoughts of a 9-year old. In Ictu Oculi, sums up a visit to this chapel. However, the sheer size of the works of art are a visual treat as they fill up entire walls of the small chapel. We do love this chapel, morbidness and all. A visit to this Baroque chapel will leave you stunned and amazed at just how impressive the artwork is. It makes one realize just how precious life is. The working hospital still cares for the elderly and poor. Monday to Sunday from 10:30AM to 7:30PM.

To understand Sevilla’s culture, one must understand Sephardic Jewish Culture. So much tradition and food came from the Jews of Sevilla. Bringing our kids to see just influential the Jewish Community was in Sevilla left an impression on all of us. However, it goes without saying that it left our hearts heavy to know that the community was forced to convert, hide or were killed during the Inquisition. Museum dedicated to Sevilla’s Jewish past. Very informative with some historic artifacts. Monday to Sunday 11:00AM to 7:00PM.

There was a lot of begging for this one. The horses were too cute not to have a ride. What parents could say no? We could not. Most of the rides will take you through Maria Luisa Park and by The Plaza de Espana. What kid doesn’t want a carriage ride?

The endless options of places to stay in this city can be overwhelming, but I knew we wanted to stay near the Cathedral. I booked at the Petit Palace Marques Santa Ana. Nice enough place, no breakfast, but located close enough to many cafes to grab a quick bite. The hotel is walking distance to all major sights in Sevilla and was able to accommodate all five of us in one room. One nice touch was that they did have some toys and art supplies for the kids–the little touches.

We were in Sevilla in summer. The perfect season for the perfect, vine ripe tomatoes . I don’t know if it’s the Andalusian sun, the soil, but the tomatoes in the south of Spain, have the perfect balance of sweet and savory with the right amounts of acidity. These tomatoes are what makes the gazpacho so tasty. I was on a mission to not only eat as much as possible, but to also replicate the taste of the delicious, cold soup in my own kitchen. 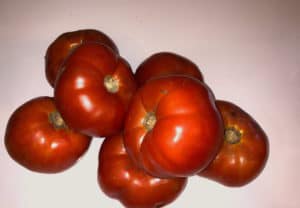 While on my mad, slightly obsessive, gazpacho eating culinary explorations, kids discovered Pringa a dish consisting of beef or pork with sausage cooked in fat for hours and served with bread. This became their breakfast of choice for the time in Sevilla. It was only three breakfasts, it was a great stick to their ribs meal, that gave them the energy to explore throughout the day. I on the other hand went straight for the Gazpacho, analyzing the taste, observing the manner in which it was served and ingredients. I asked questions in my broken Spanish about the soup and savored the bold flavors all the while creating a recipe in my head of how I would make it at home. 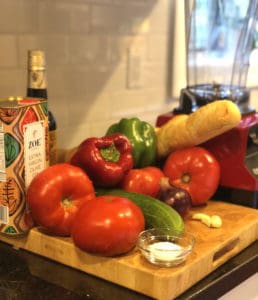 I only make gazpacho in the summer time. Tomato season. I wait until I can get my hands on local ripe tomatoes as well as other locally grown vegetables to put in the soup. I must admit that when I make my gazpacho, I do not use measurements, I just add to taste. I do however, use a high-powered blender, the Vitamix.

to blend all of the ingredients. The other step I do, which you don’t need to, is I use a chinois .

I am actually slightly obsessed with using this kitchen tool, as it makes the soup come out silky and beautiful. The chinois allows you to strain out the pulp from the liquid. Some prefer to eat their gazpacho chunky. 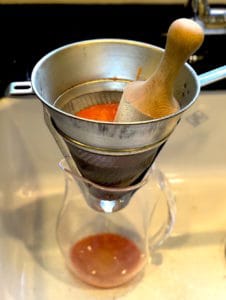 I prefer a silky soup that I can add chopped vegetables, cucumbers, red onions, bell peppers, back into the soup. My final touch is that I drizzle some good quality Spanish olive oil on the top. This enriches the flavor of the soup.

I’ll reiterate that I typically don’t use measurements, but will give them for my recipe. 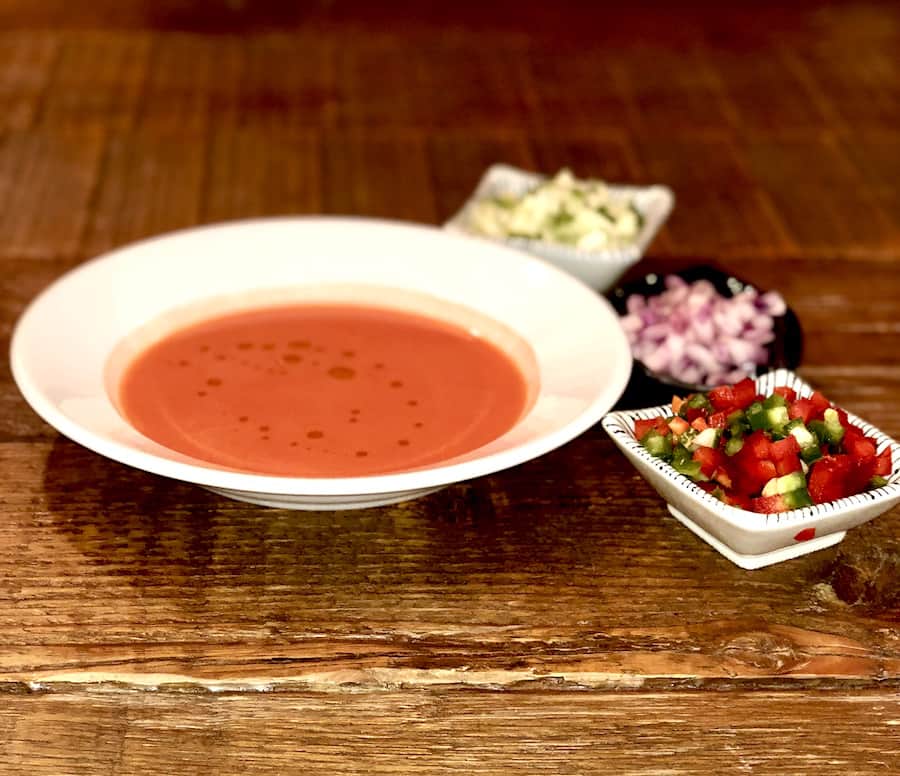 Make sure to serve this cold.

This post contains affiliate links, meaning no additional cost to you. I will earn commission if you click through and make a purchase. 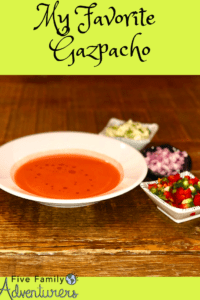 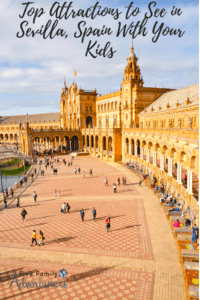