Disney, now the owners of the Star Wars Franchise, has made sure to incorporate all things Star Wars into their Hollywood Studios theme park in Disney World. Disney just opened Star Wars Galaxy Edge, an addition to Hollywood Studios, and it is a hit. Additionally, a full, immersive Star Wars-themed hotel is currently under construction and plans to open in 2021. You can catch Hollywood Studios’s fireworks show called A Galactic Spectacular, on certain nights during the week. Dates can be found on the Disney Website.

Before the Star Wars Galactic Spectacular show, Disney also has a pre-firework enhancing event to give visitors their best experience. This is fittingly titled The Star Wars, A Galactic Spectacular Dessert Party. We chose to do the event as I love Star Wars (I saw the original in the theaters as a kid when it first released) and my kids have been following the latest installments of the Star Wars movies. They are more current and better versed with the characters than I am. I still think of Luke Skywalker and Princess Leah when I think of Star Wars.

I love Disney and love sharing what I’ve learned. If you are planning your own trip, I can help. Check me out at Alison-Wishes and Wizards Travel Company or email me at alison@wishesandwizardstravel.com

If you plan to be at the parks all day without breaks before the Star Wars Dessert Party, then make sure you are well prepared. Have your Disney Day Bag packed and ready to go before walking out the door for your epic, day long, adventure.

What Is The Star Wars, A Galactic Spectacular Dessert Party?

The Star Wars, A Galactic Spectacular Dessert Party is designed to give Disney guests an ultimate Star Wars experience prior to the evening fireworks show. It begins an hour before the fireworks show in the Launch Bay area of Hollywood Studios. The Launch Bay area is solely dedicated to all things Star Wars. Each guest attending receives a lanyard with an escort card and can go into a specially designated room with black table clothed table, chairs, and buffet food and drinks as well as specialty alcohol drinks, beer and wine for adults.

There is an additional cost of $79.00 USD per person and $45.00 per child (ages 3-9). As with many Disney add on experiences, like the Disney VIP Tour Service, there is an additional cost outside of the regular park ticket entrance price. Guests must also have a valid park entry ticket in order to attend the event. Of course if you don’t want to spend the extra money, you can always do a  magical character experience.

What To Expect While At The Party

When guests arrive to the Star Wars, A Galactic Spectacular Dessert party, they are checked in and escorted to a designated area in Launch Bay and can immediately start to eat and drink. Security is “strongly” enforced throughout the party by Storm Troopers. The Storm Troopers walk through dessert party area to ensure that all things are in check. 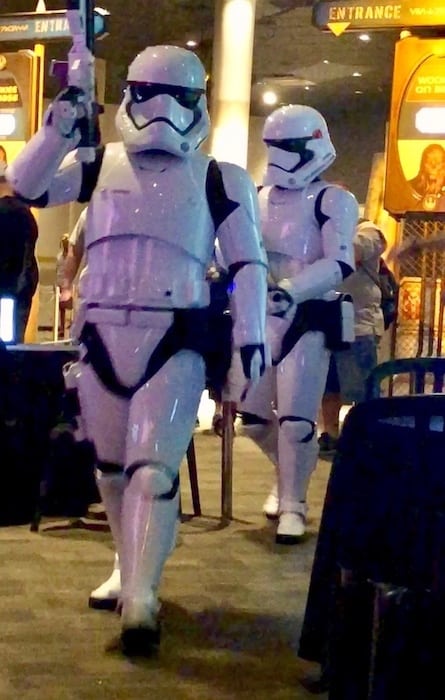 The launch Bay is filled with Star Wars movie props, costumes, and movie artwork. Guests can take time to walk through and admire all things star wars. Guests can also visit characters while at the party. The wait lines are shorter and photo times with the characters don’t seem to be as rushed.

The Star Wars, A Galactic Spectacular Dessert Party has a fantastic spread that any child and adult will go crazy with a sweet tooth. They also have a savory section, which was fortunate for us as we had a late lunch, so this was our dinner.

Before eating, we hit the drinks. There were non-alcoholic drinks available, water, sodas and some mixed fruit-punches, a watermelon lemonade and a mango, orange passion fruit concoction. There were alcoholic options available as well, beer, wine and a couple of mixed drinks with star warsesque names, Galactic Punch, Cosmic Citrus Twist and Lightspeed Margarita. I’m not typically one for a sweet mixed drink, but I decided to try the Cosmic Citrus Twist, it was decent, not earth shattering, and one was enough. 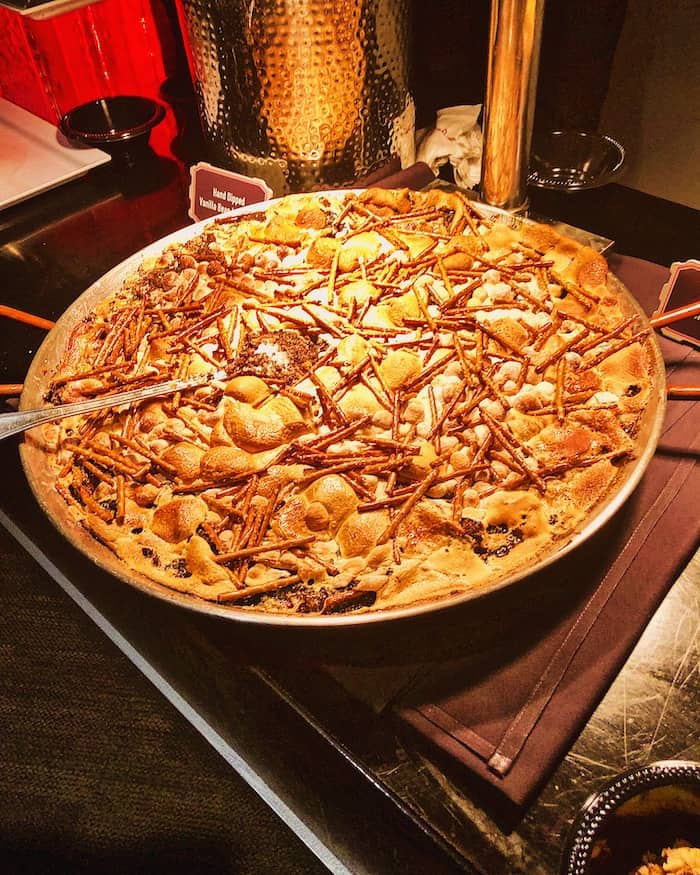 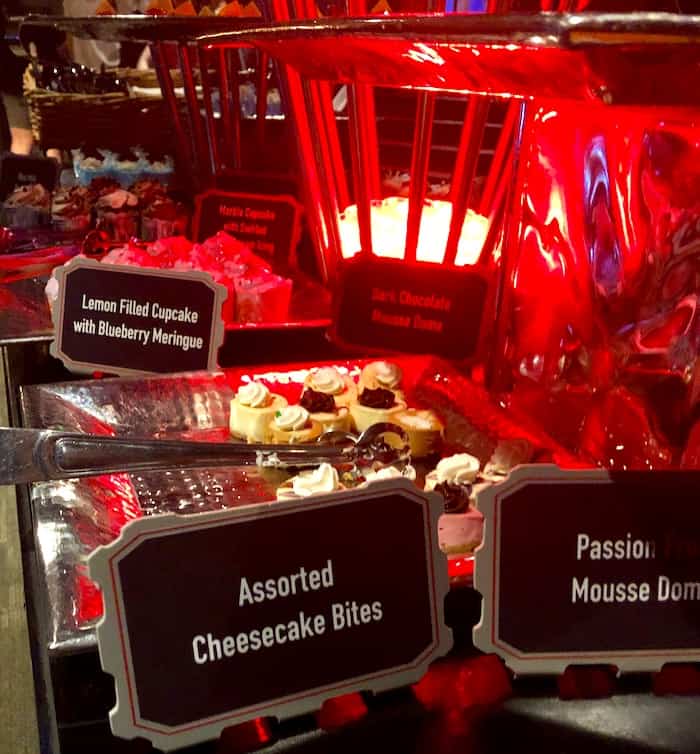 Upon arriving and grabbing our table, the kids immediately flocked to the sweets. They filled their plates with such things as chocolate cupcakes, lemon-filled cupcakes with blueberry Meringue, assorted cheesecake bites, passion fruit mousse domes, dark chocolate mouse domes, marble cupcakes with swirled buttercream icing. Then they discovered the large, deep-dish, warm, bread-pudding with pretzels, chocolate M&M’s and marshmallows, scooped into a gooey form onto the plate with vanilla sauce to pour over. The ultimate delight was the freeze-fried chocolate hazelnut (Nutella) mousse. If eaten right at the right moment would allow the kids to exhale some smoke out of their mouths. 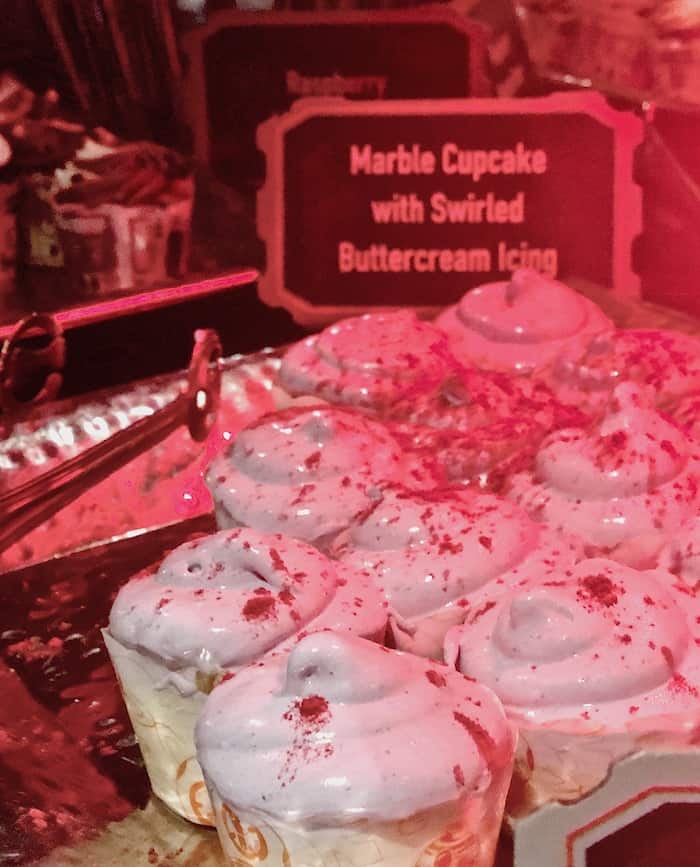 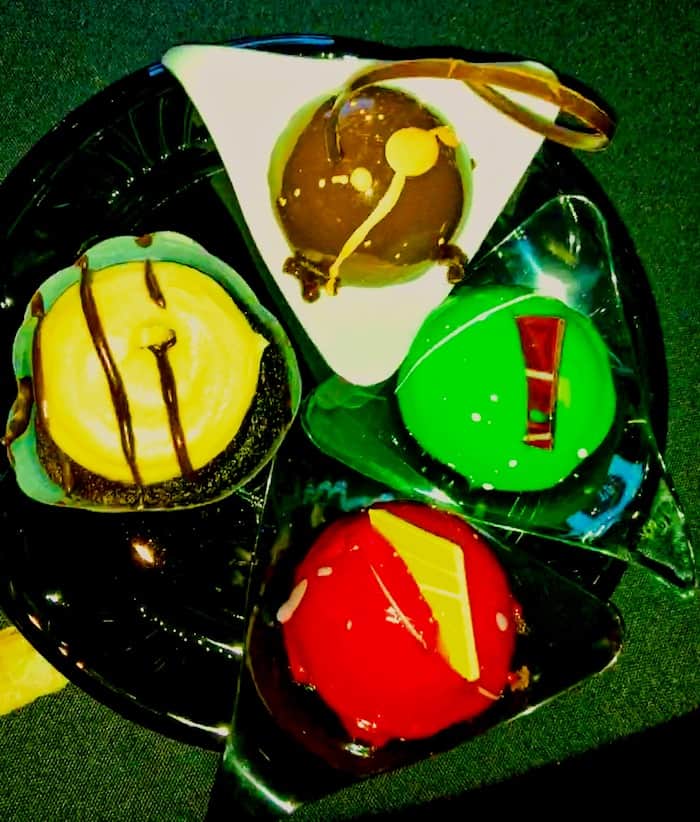 I, on the other hand, headed straight for the savory as I was hungry and I don’t have a huge sweet tooth. However, I did indulge in some dessert, after all it was a dessert party. I was impressed with the array of savory food presented for a party. The Star Wars, A Galactic Spectacular Dessert Party may have to add “And Dinner” into the title with all of the offerings. 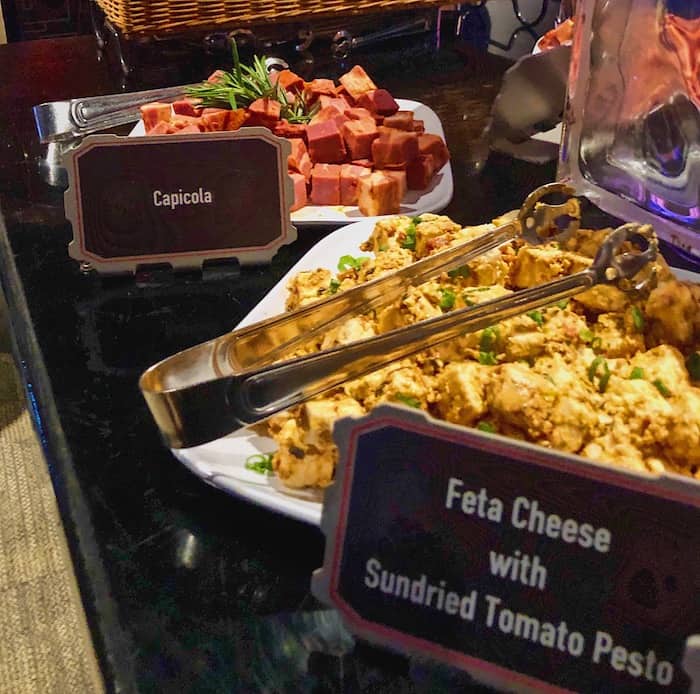 I quickly filled up my plate with pickled vegetables, mozzarella cheese balls with chimichurri seasoning, smoked sea-salt flatbreads (my favorite), sliced prosciutto, capicola cubes, and feta cheese with sundried tomato pesto. It was plenty of food to fill my dinner needs. As I walked away, I saw my kids filling their plates with the savory choices–decided to take their dinner choices backwards, sweet first followed by savory. Since it’s Disney and we were on vacation, I was not going to argue.

During the Dessert party, we encountered a couple of really cool character meet-and-greets. These were character visits we probably wouldn’t have done during the day as the lines are typically very long.  However to avoid those lines, you could use this Hollywood Studios fast pass guide to help you navigate easily through the wait times.

As the Storm Troopers walk through the party, you can stop and take photos with them at any time. We also got to meet Chewbacca, Kylo Ren, and BB-8. Our wait time was maximum 5 minutes and we all got to do group and single photos as well as multiple variations of family without anyone getting annoyed because we were taking a bit longer. 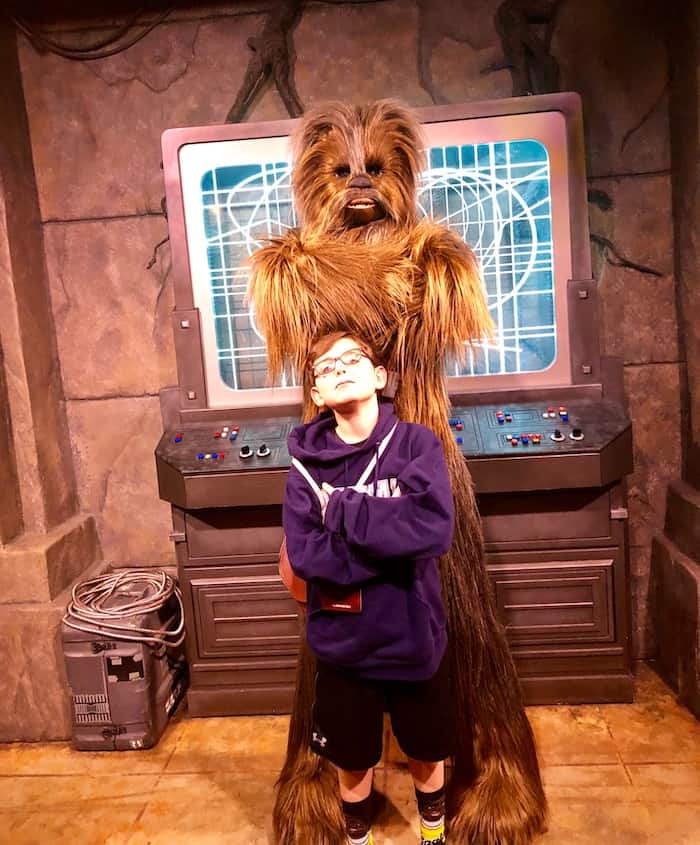 15 Minutes Before The Fireworks

About 15 minutes before the Star Wars, A Galactic Spectacular show starts at Hollywood Studios, a team member will gather the guests, make sure you have your lanyard and pass and line everyone up to move outside. Guests are led outside by Storm Troopers and guided to a designated viewing area. It’s kind of cool, as the Storm Troopers make a big deal of having all the other Disney guests move out of the way as they lead their VIP guests to the dessert participant viewing area only.

The Show is an immersive light and laser show with fireworks to accompany the Star Wars themes that are projected on The Chinese Theater building in front of you. However, right before the Star Wars starts, there is a Hollywood through the ages show projected on the Chinese theater building. It is a show bringing together all the years of Hollywood’s finest movies, actors, and greatest moments. Don’t make the mistake like we did and when it finishes, get up and think it is time to leave. It is a preview to the main show. 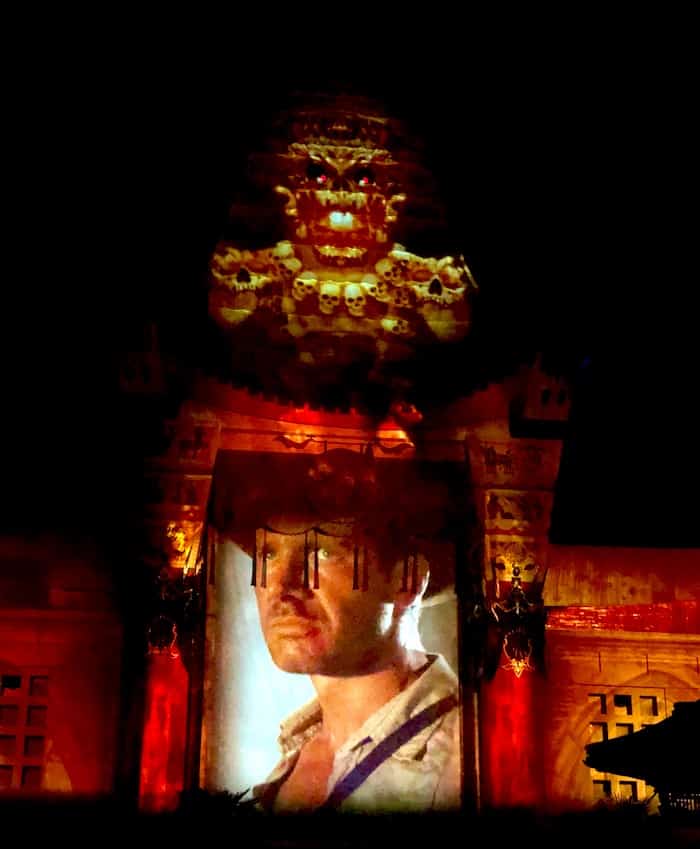 The Star Wars, A Galactic Spectacular Firework show draws the viewers in with pulling out the finest, most memorable moments of all the Star Wars movies, projecting them on the Chinese Theater, setting it to Star Wars theme music and adding a fantastic firework display during the event. Attending the dessert party, we got to sit front and center for perfect viewing of the show. 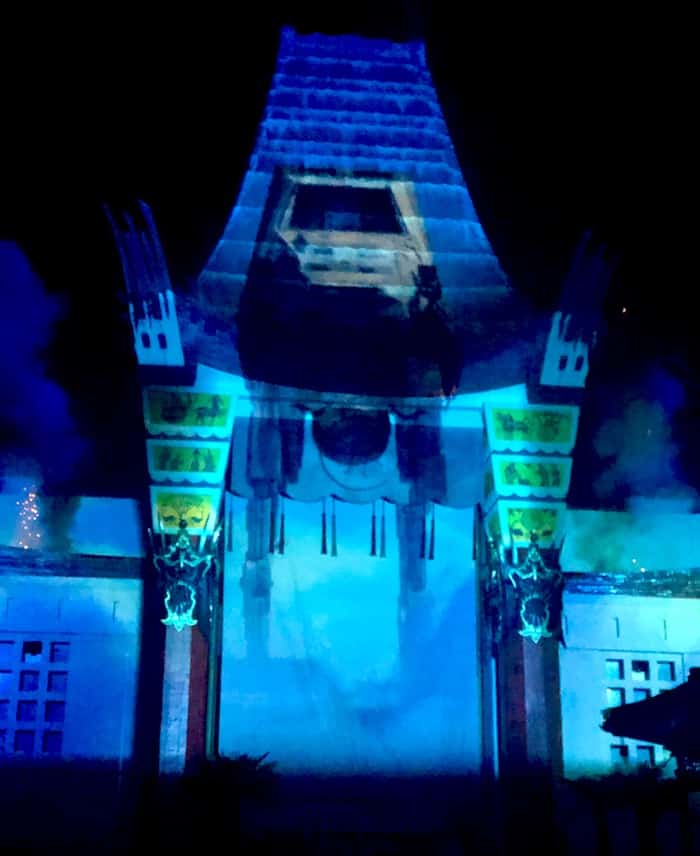 Overall the Star Wars, A Galactic Spectacular Dessert Party was an entertaining hour with good treats for both adults and kids alike. Some may find the additional cost a bit steep. However, you can offset the cost by making it your dinner, dessert, all with drinks included. Moreover, you can’t beat the viewing area for the show. If you are a die-hard Star Wars fan, then I would recommend this event.

This post may contain affiliate links which means that we receive a small commission if you click on a link & purchase something that we’ve recommended – at no extra cost to you. This helps us to keep our site running so we can continue to provide free content.

Pin It For Later: 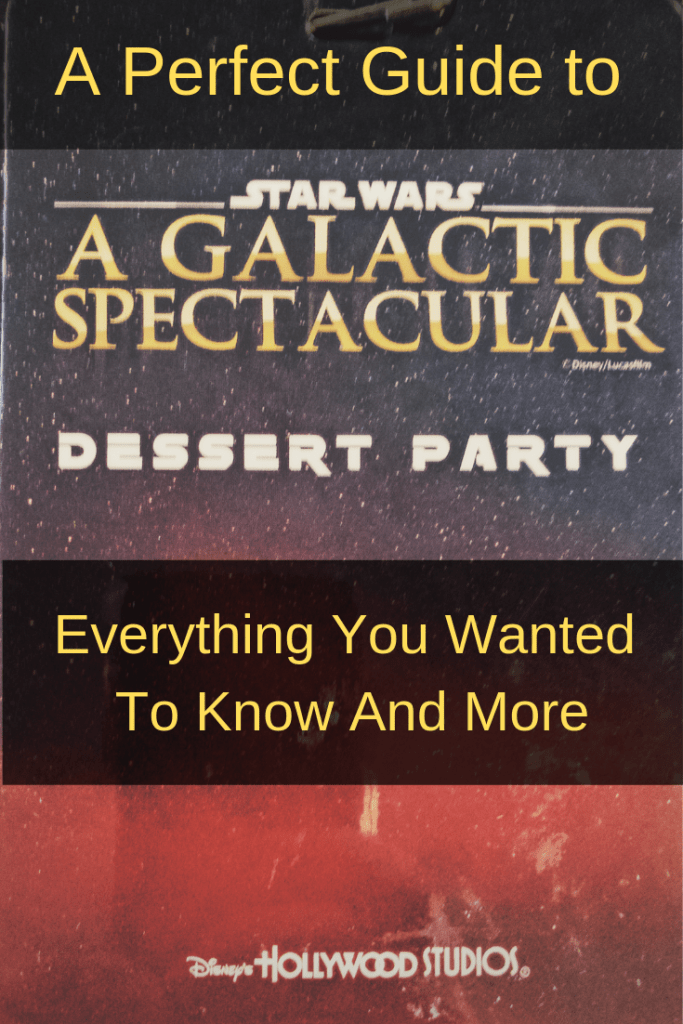 Disney VIP Tour Service; 6 Reasons To Use It; And some Reasons Not To
Next Post: Two days In Quebec: Best Things To Do With Kids

Hometown Eats: A Guide to Local Cuisine Around the World
7 Awesome Family-Friendly Activities to do in Red River Gorge, Kentucky
Why Using a Disney Planner is a Great Idea When Planning a Trip to Disney World
The Ultimate, Must-Do ATM Cave Adventure, Belize