It’s been my good fortune to travel to Costa Rica several times for pleasure and work. Each time, I find myself falling more in love with the country. Costa Rica is a relatively safe country to visit, with decent infrastructure, and a strong commitment to tourism. Interestingly, every time I have gone, I have been told to avoid the Caribbean coast because of safety concerns.

Travelling throughout the country with a large group of my extended family, we had the opportunity to see the Caribbean coast of Costa Rica. Our visit included a two-night stay in Tortuguero National Park, located in the Limon district. We arranged for a guided tour, as independent travel to this area is a bit tricky (especially with eleven of us). No roads exist to take you into the park; only waterways. The best way in is either a puddle hopper direct from San Jose or private boats into the park.

Our journey began from the Alajuela, north of San Jose. We departed on a private bus, making a three-hour journey towards the Caribbean coast. The road started out paved, but eventually turned into a dirt road with large potholes, which slowed our progress. Kids didn’t mind; they rather enjoyed the rugged dirt road adventure. Adults, on the other hand, were a bit weary of the constant bumps. We all enjoyed watching the landscape become increasingly dense with jungle as we headed east, towards the coast. With an hour left of our bus ride, we were met in transit by an armed convoy that escorted us the rest of the way towards the coast.

The armed convoy was due to the increased drug trafficking seen in Costa Rica in recent years. Costa Rica does not have an army and relies on working with security forces in neighboring countries and using the law enforcement of their own country. Sadly, they are seeing an increase in crime and homicide due to the increase of drugs coming through the country. 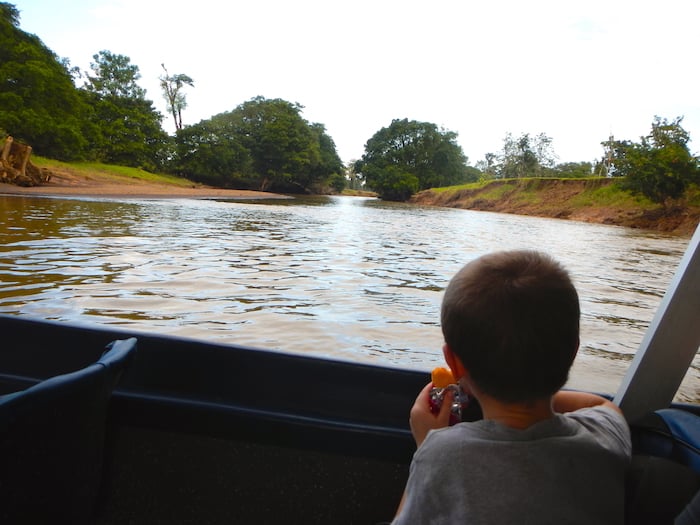 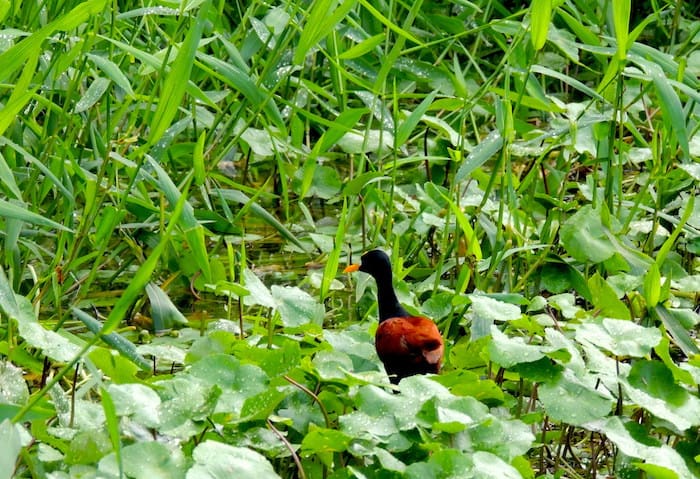 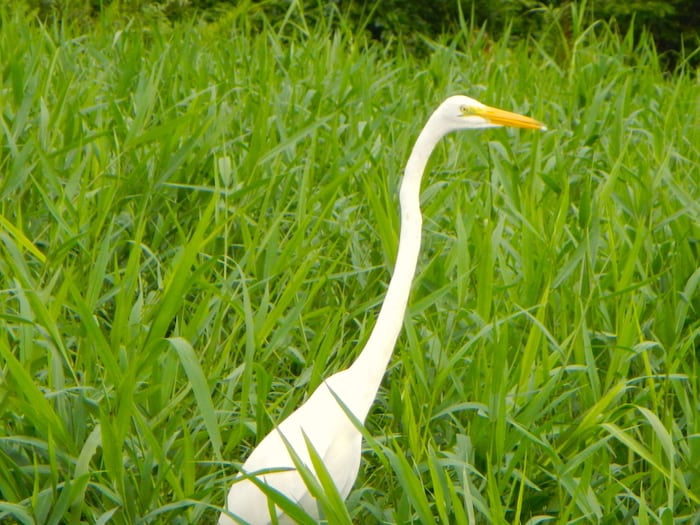 Our boat took us down narrow, and sometimes very shallow, canals. We watched the jungle grow thicker and thicker the further we went. We caught glimpses of wild life along the way, many birds, caimans and the occasional howler monkey. After about an hour on the boat we arrived at our hotel, The Evergreen Lodge, Tortuguero.

We were greeted with a drink and a surprise visit by some not-so-shy white headed capuchin monkeys. We were escorted to our rooms and were told to meet back at the dock in an hour. The rooms were very basic, with very little lighting and screens (without windows). They were surrounded by dense jungle, which meant many critters. Kids loved it. They voted it the best hotel by far in Costa Rica. The hotel had a wonderful turtle-shaped pool and a zipline for the kids to do during some down time. They even had a small bar by the pool for snacks and cocktails.  It was relaxing and quiet. 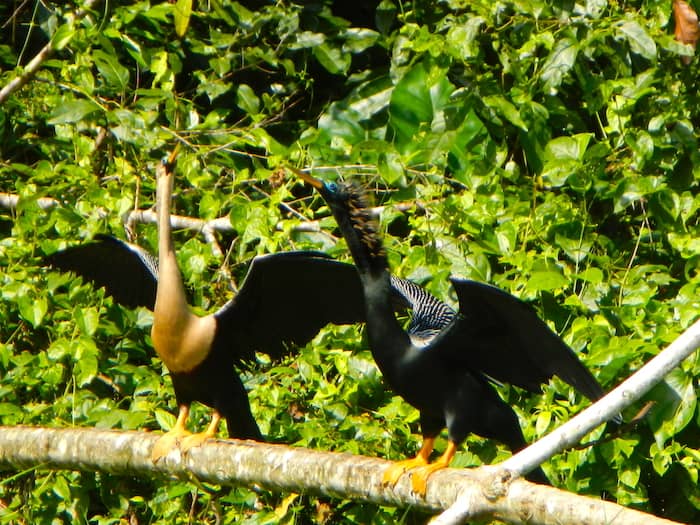 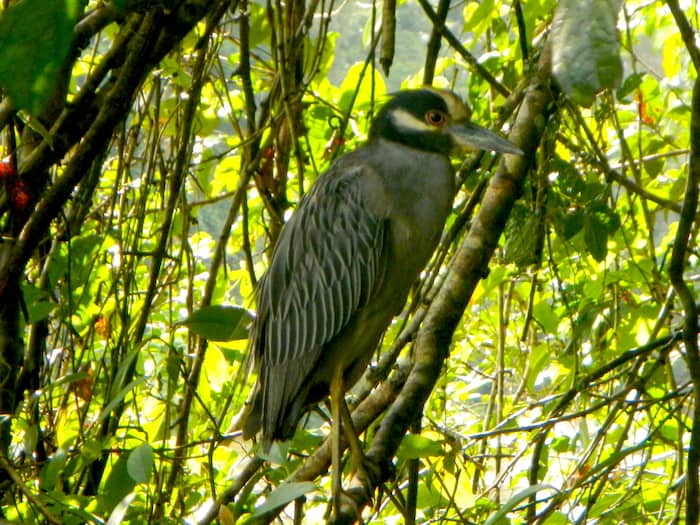 After dropping our stuff off in our rooms and checking out our surroundings, we all met at the dock for a tour of the canals and wildlife. We hopped onto a boat and were given a tour of the dense jungle of Tortuguero National Park, Costa Rica. It is surrounded by waterways and small communities jutting out from the jungle. The kids enjoyed spotting the many birds and monkeys. We also came across turtles and many young caimans hiding out among the plants.

The boat turned down many narrow, alley-like waterways, into lagoons and back out into the canals. I was amazed the captain didn’t get lost among the passages or stuck in the thick grasses and roots. After about an hour, we headed back to the hotel for a free afternoon. Kids went swimming while I read and watched birds and howler monkeys in the trees above. 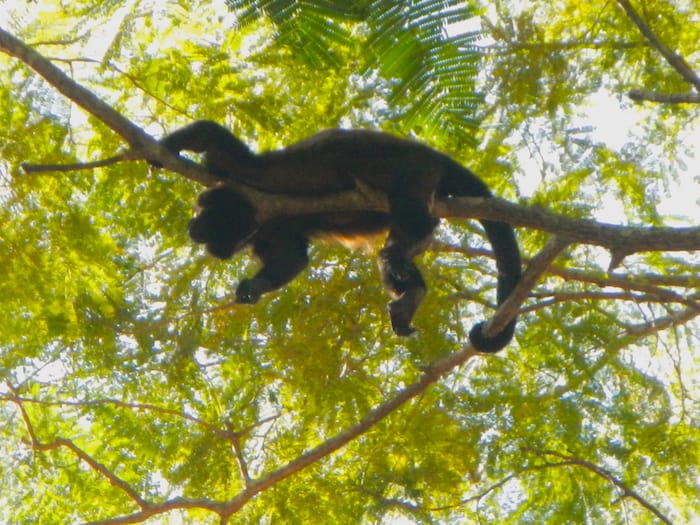 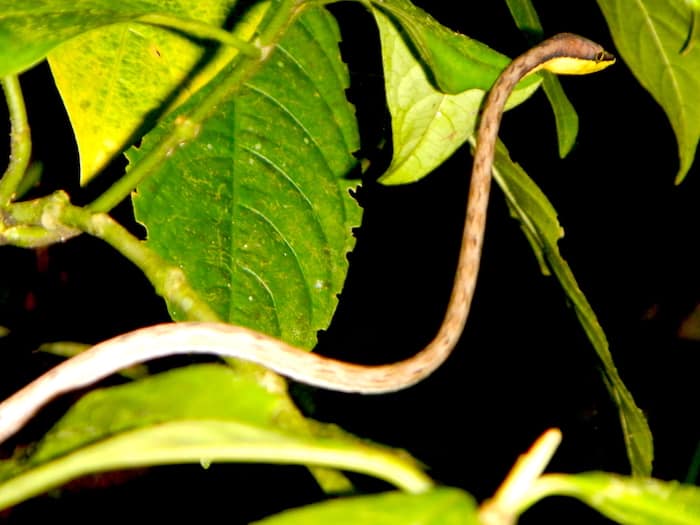 In the evening, after dinner, the kids decided to do a night walk. The hotel arranged for the guide to meet us at the restaurant and he took us around the vicinity of the hotel. The hotel itself was surrounded by dense jungle and one could easily get lost if wandering away from the group. The guide–using a red light–pointed out nocturnal wildlife. We came across spiders, frogs, caimans, a snake and many bugs. The kids loved finding the creatures and couldn’t stop talking about it when they came back to the room. Our sleep was filled with the sounds of the jungles, the occasional screams of animals, and the singing of bugs. It was wonderful to fall asleep to. 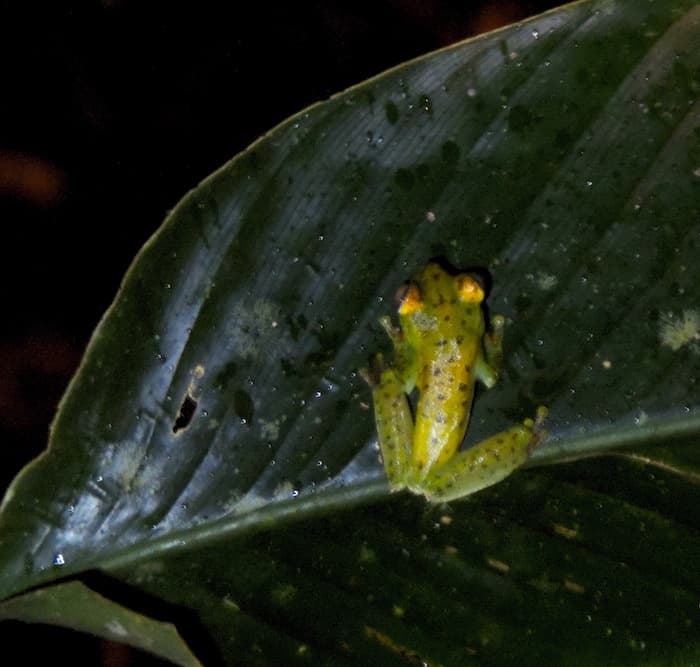 After a typical Costa Rican breakfast of rice and beans, eggs and fresh fruit, we all hopped on a boat to head to the village of Tortuguero. Once there, we were taken to a sea turtle conservancy organization. We then learned about the turtles and the conservancy the local area provides to maintain their survival in the wild. Tortuguero National Park, beach has 22 miles of protected beach area and is one of the most important nesting sites for the endangered green turtle in the western hemisphere.  Other types of turtles nest here as well. 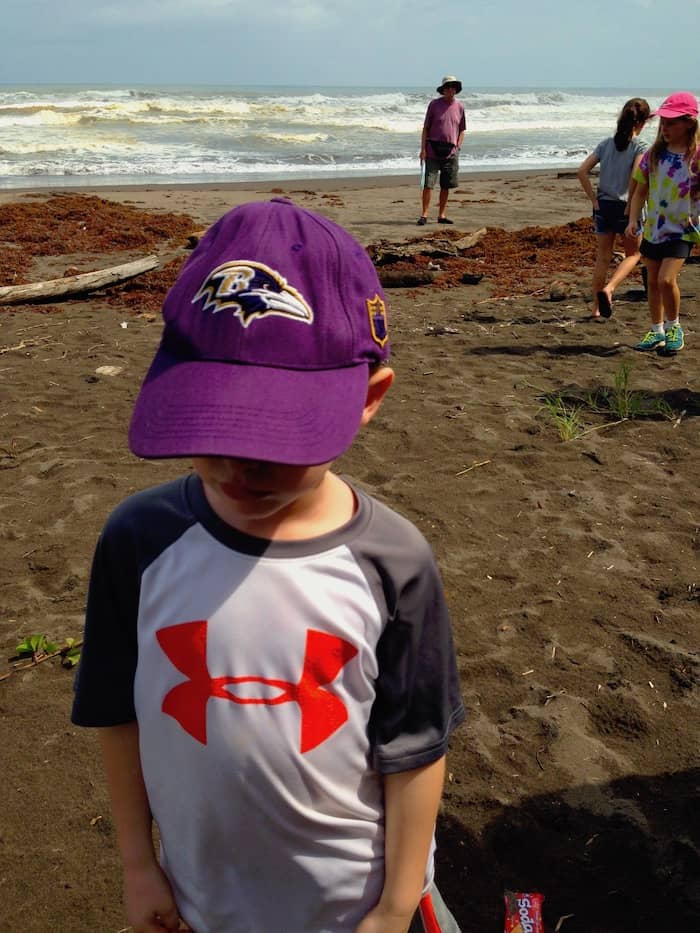 We were not there during nesting or hatching season, but we were given a tour of the area and learned about the different species. We also had a guide teach us about the coconuts, how to differentiate between ripe and not ripe, how to cut into one, and the healing attributes of the coconut. While we learning,

After the informative morning, we were given an hour to walk around the town.  The kids found puppies and a good portion of the hour was spent taking pictures with these puppies. The village is small with few shops and just a couple of places to eat. We did find an ice cream shop, a nice treat for a morning snack. 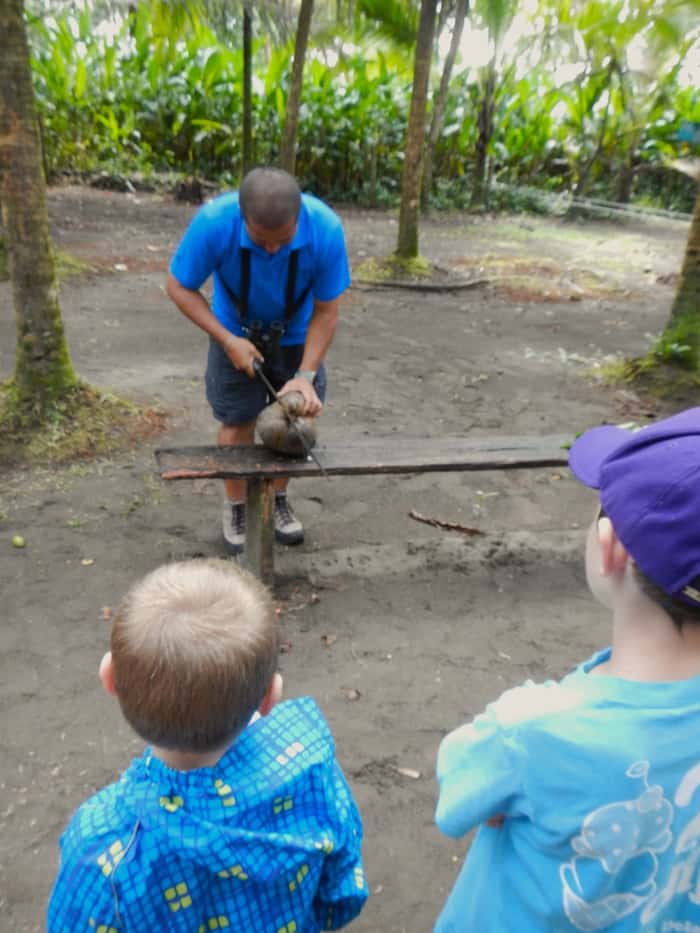 After lunch, we were given the option to hang out at the hotel and relax or take another tour of the canals. The kids chose to hang out with my parents, so my husband and I decided to tour the canals some more to search for wildlife. It was just the two of us on the canals, enjoying nature and each other. 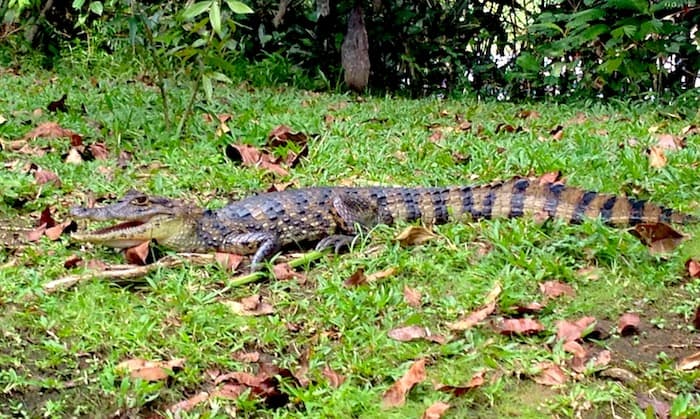 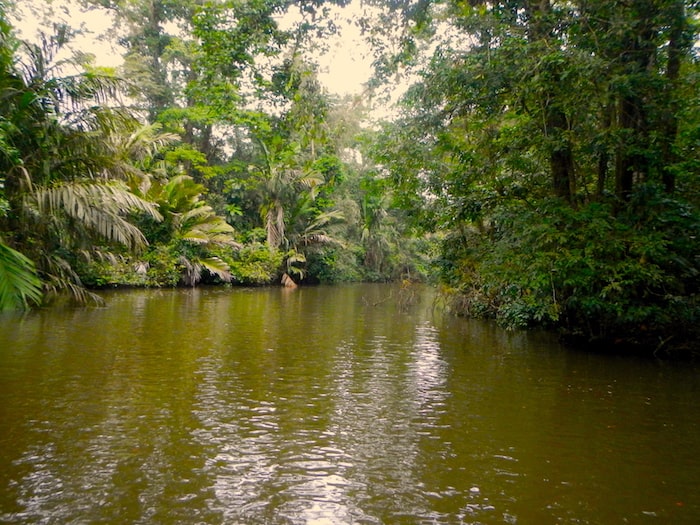 The kids, on the other hand, took advantage of the zip line at the hotel before spending the afternoon splashing in the pool. As the day wrapped up, we had a dinner with music and family time and concluded our last evening in Tortuguero. Although we arrived by boat to Tortuguero National Park, we were taken to a small clearing and flew out by puddle hopper direct to San Jose. 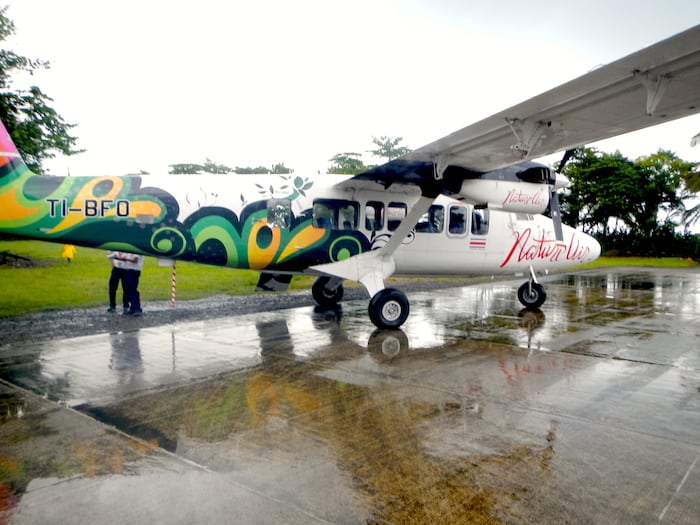 An easy drive from San Jose will take you inland to discover La Fortuna area of Costa Rica including the famous Arenal Volcano and zipline. 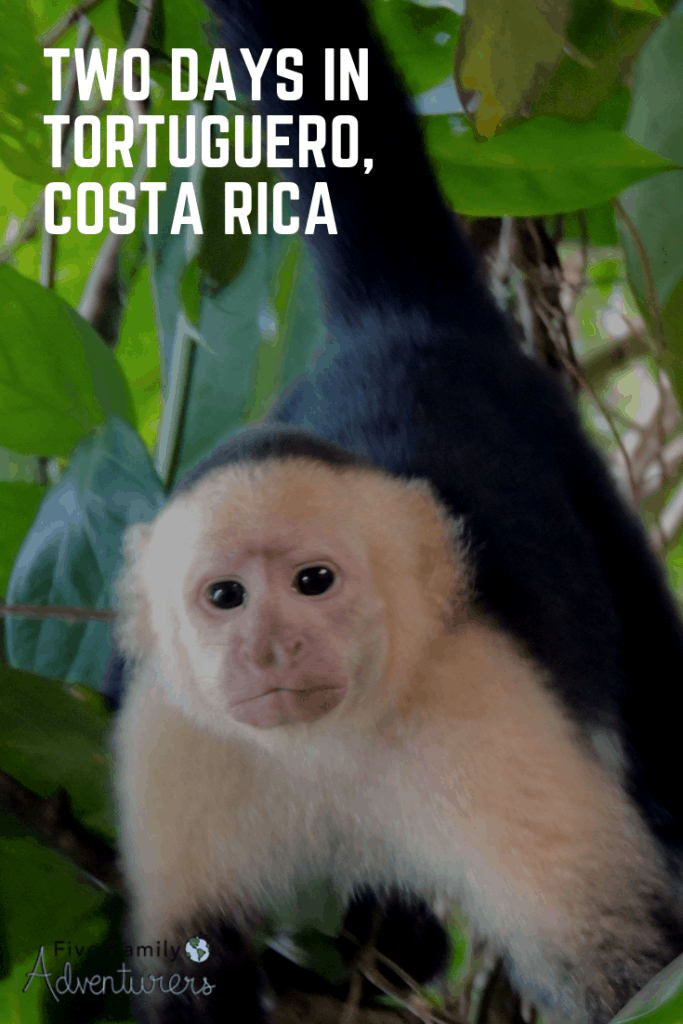 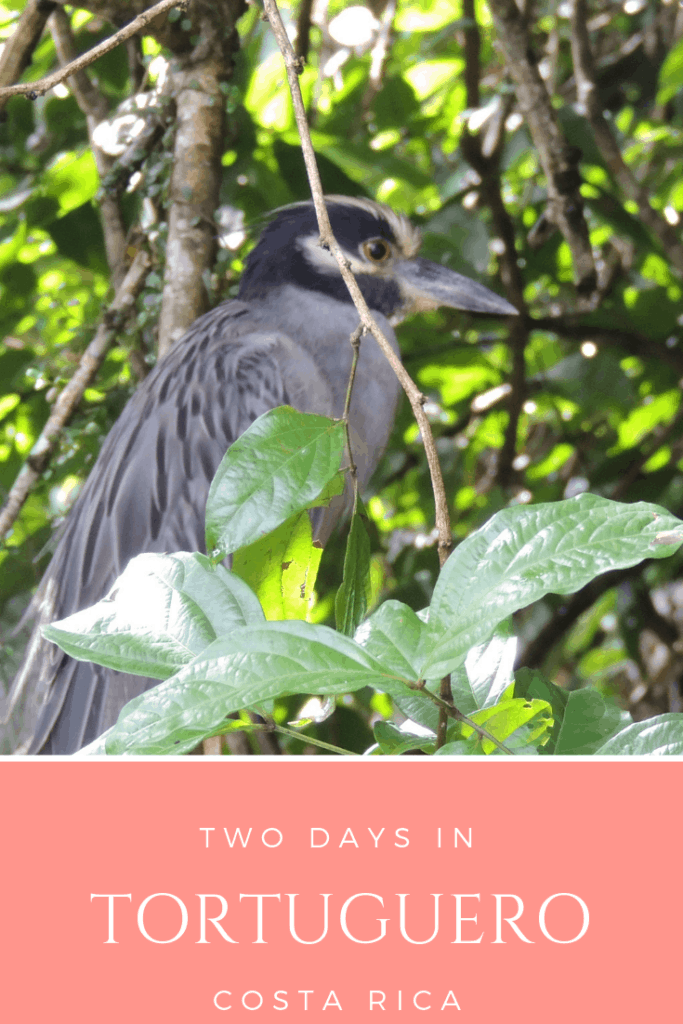 Seven Ways To Cure Wanderlust When Not Traveling
Next Post: An Unplanned, 24-Hour Winter Vacation in Washington DC