Sunrise at Tikal. A Child’s Perspective

“Fine,” I said groggily. I sat up and rubbed my eyes. I took a second to gather myself and then realized what we were doing. “It’s so early,” I complained to whoever was listening.

“Get up and brush your teeth,” my dad said. I understood that what he said was not a suggestion. I pulled the sheets off and walked over to my bag. I grabbed my clothes.

“Shake them out,” my mom reminded me. “There are scorpions here; we’re in the middle of the jungle,” she added on.

I shook my clothes out and put them on. I trudged into the bathroom. I grabbed my toothbrush and put some toothpaste on it. I brushed my teeth, my eyes half shut. I walked back into the main villa room. I looked out the window. It was completely dark. The main lodge still had no lights, as the power didn’t come back for it until six. It was four, four in the morning. We walked over to the lodge.

Our guide came in from the dark. He had brought some brown paper bags. “This is your breakfast,” he explained. We all took one and shoved them in the backpacks. We proceeded to hike to the trail.

I was still adjusting to where I was. I remembered that last night we had arrived in Guatemala and hopped on a small plane over to the town, Flores. From Flores, we took a van to Tikal to arrive at a small hotel in the middle of the jungle. I suddenly came back into reality as we approached a small shack. There were a few Guatemalan soldiers waiting there. They said something to my mom and she grabbed our passports. They looked at them, and after a few minutes gave them back to us. They gestured down the trail.

A Hike to Tikal in the Dark

It was now 4:30. We walked on, over roots and rocks, under thorns and branches. We kept like this for another fifteen minutes. Suddenly the guide put out his palm in a notion to stop. We stopped. He bent down and slowly gestured to a small thing that looked like a stick. I strained my eyes and realized that it was a spider. It was medium size, about five inches long. It glanced up at us and quickly scurried away, surprised by our encounter. 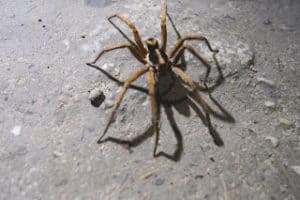 We kept walking, and at approximately 5:05 we entered a small clearing. We turned to the right where there were no trees. I couldn’t believe my eyes. There was a large temple, with steps leading up to the top. I was in awe. The temple reached up to the top of the tallest trees. I walked over to it, and I stood five feet away from the behemoth of a temple. I took a few steps over. I extended my hand and touched it, running my hand up and down, feeling the smooth parts and the rough ones.

“Can I climb this?” I asked the guide. My brother nodded in agreement, and we both turned to face the guide.

“We will, but not yet. There is very much left to explore,” he explained. I gave a nod of affirmation, and with that, we got back on the trail. We walked farther, past trees that seemed to never end. We kept walking for what 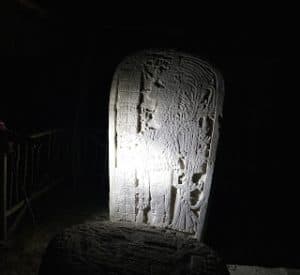 seemed like another two hours, but was only 30 minutes. We finally stopped at a large staircase. “Climb these stairs and the destination will be at the top,” the guide announced.

I took a look at the long staircase. It was hundreds of steps! How was I supposed to do this at 5:30 in the morning? I clenched my teeth and took a large step onto the staircase. I took another step, and another, another one, and just walked. After about two minutes I stopped and glanced over the side. The sight gave me 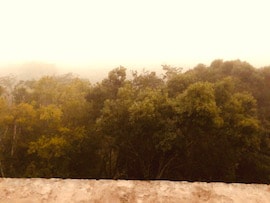 vertigo. I must have been about 75 feet up. I waited for a second, then proceeded on with the steps. I looked up and realized I was only about halfway done. 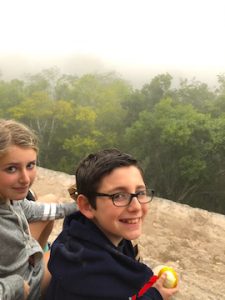 After about 10 grueling minutes of vertigo-filled climbing, we made it up to the top. I realized that we were at the top of a temple! I walked as close to the main structure as I could, being careful to not look down at the ground 200 feet below us. I reached the stairs, and sat down quickly, careful to not stand near the ledge.

Sunrise, the View Above the Tree-tops

I looked out, and I was shocked by what I saw. It was a pitch black night still, but I could see fog at the tops of the trees. I admired the view, it was so beautiful. The rest of the group came over and sat down. I gazed out, encaptured by this wondrous view. I relaxed, realizing that for this moment, I did not have a worry in the world. I sat. And sat. And sat. For a half an hour, until the the sun started to rise. It was still not even dawn. But then, the jungle came alive. It was as if an 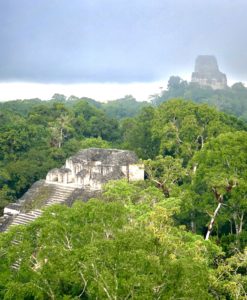 alarm clock had gone off. The bird’s started singing, the monkeys started hooting. It was such a difference from the 2 hours of silence when we had woken up.

We sat and listened. After about another hour of listening to the wake-up calls of the jungle, we started heading down. I took one last look down, and with that, we headed back onto the trail. We took the long, never-ending staircase back down. In these two hours, I had connected to nature so much more. It was one of the most beautiful moments of my life. We reached the bottom and ate our packed breakfast. It had a sandwich, an egg, 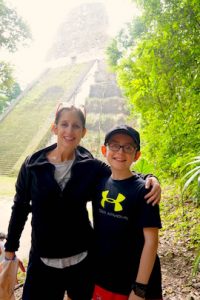 and a nectar “juice” box. I was still thinking about what had happened just 15 minutes ago. I was ready for a day that would bring us so much excitement and enjoyment.

8 Fun-Filled Things to do With Kids in Boone, North Carolina
Next Post: Tips and Takeaways from Snorkeling in Eilat Israel