Watch Out They Spit; An Alpaca and Llama Farm in the Middle of the Negev Desert. A Child’s Perspective 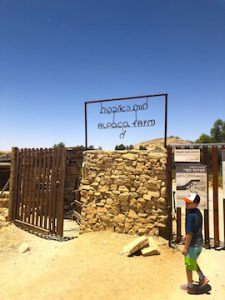 Is it a Llama or Alpaca?

“What on Earth is this?” I yelled, laughing at the funny-looking animal. “Is that an alpaca?” I questioned the farm worker. “What do you think it is?” he said back. There was an echo of people saying alpaca to the animal. 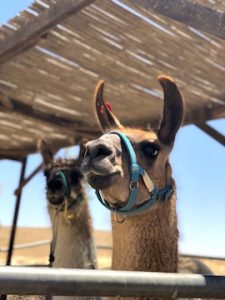 This 5.5-foot tall animal he had brought in, fluffy with matted hair, was a llama. It was impressive, just a little funny looking. We were sitting in a room with a llama and two dogs. I looked at the dog in front of me. It bit the air, trying to catch the flies surrounding it. The man working on the farm went into an explanation of what the difference between llamas and alpacas is.

“A llama may have soft hair, but an alpaca’s hair is even softer,” he told us. He went on with the story of the farm. A family that had lived in Israel went to South America. They met llamas and alpacas and brought them in not for a tourism spot, but to make clothes from the alpaca wool. After he finished his story I walked outside to look at the other llamas. 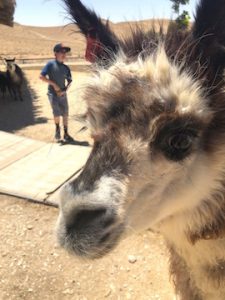 Our guide, Ron, came with a box with brown paper bags inside. “Take a bag and feed it to the llamas, alpacas, and goats,” he explained. I grabbed a bag and ran off to a few llamas. I took some food from the bag and put it on my hand. I laid my hand out flat, and a llama scarfed down the food from it. I ran on to another and did the same thing again. I walked over to another spot, where there were alpacas. Once there, I looked at the alpaca. It had funny teeth. I laughed at the funny way it’s teeth looked and remarked on them needing an alpaca orthodontist.

It did not take nicely to that and bared its ugly teeth. I laughed once again, in hysterics over this funny looking alpaca. It was clearly offended by that and spit at me! I jumped over to the side, careful to avoid this big wad of grass coming from its mouth. “It just spit at me!” I screamed.

I walked on, still feeding animals as I went. I saw more funny looking 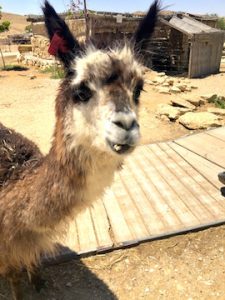 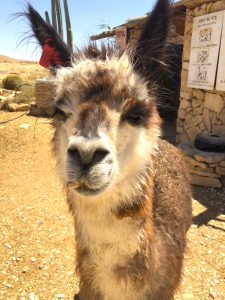 animals, laughing at them. I came across a llama. I put out my hand to feed it, and it spit at me! I had once again been spit at! I gasped, now covered in llama spit. I gave it the mean eye and walked away.

I kept walking around. Occasionally I would chuckle at a llama or alpaca. I came across the goats eventually. They were all big, with horns the size of my arm. As soon as they saw me, they nearly jumped over the fence, clearly ecstatic to see me. As soon as I put out my hand, five goats came over, wrestling and jostling each other to try to reach my hand. The biggest one of the group finally owned this “fight” and ate from my hand. My eyes grew wide as I realized what was in the middle of the enclosure. “A pig!” I yelled, snickering. It was funny, in a goat enclosure, a big fat pig. I looked in my bag and realized that I was nearly out of food.  As soon as I realized, my dad yelled, “Time to go!”

I sighed, sad we had to leave so soon. I started walking, quickly emptying the remaining food in my bag into the animals’ mouths. I finished the bag as I reached the entrance. 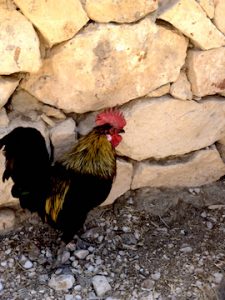 The farm worker interjected, “But first, do you want to see puppies?”

There was a chorus of yes from the kids, and we went over to the puppies just born from one of the dogs we met when we first arrived. The man opened the gate, and two tiny puppies met us. We all yelled our oohs and awws. I walked over to one and gave it a tummy rub. It gave me a look of pure joy. I smiled at it. It was so cute! We kept playing with the dogs, but after 15 minutes, it was time to go. We all yelled bye at the dogs and went on our way. I pet all the llamas and alpacas on the way out, careful to avoid the two that spit at me.

“תודה,” I said. That was thank you in Hebrew. The farm worker replied with a “בוקשה.”That was you’re welcome. I smiled and walked into the van. I grinned, and then we got on our way to the next stop.